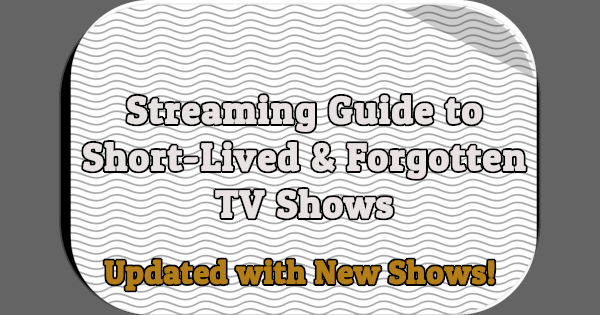 I published my Streaming Guide to Short-Lived & Forgotten TV Shows in mid-July and the response was greater than I anticipated. My goal was to put together a useful guide for fans of short-lived TV shows and I think I succeeded. With this first update, the number of streaming services covered by the guide rises to nine with the addition of ABC and NBC.

Both networks offer a selection of “Throwback” TV shows through their websites, apps, and on streaming devices like Roku TV and Amazon Fire TV. Most of these shows are from the last decade or so and virtually all were produced by the studio connected to the network (ABC Studios for ABC and Universal Television for NBC).

Other new TV shows added to the guide include the following:

A big thank you to readers C. and Zach for their contributions, plus several people on Twitter.