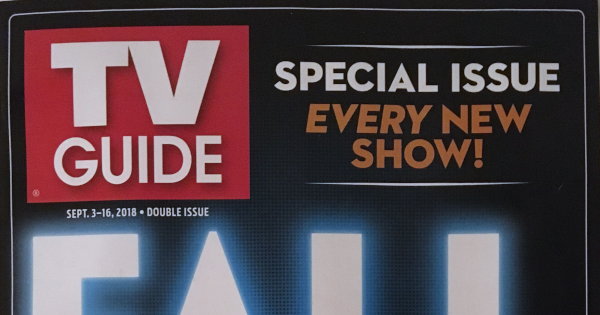 I didn’t have time over the long holiday weekend to review this year’s Fall Preview issue of TV Guide magazine. According to the official editorial calendar, the issue went on sale last last Thursday (August 30th). However, I checked a grocery store and the closest Barnes & Noble that day and both had the previous issue on sale. When I went out again the following day, the grocery store still had the previous issue on the racks in the check-out aisles. Fortunately, Barnes & Noble had the Fall Preview issue in its magazine section.

For the first time ever, I only bought a single copy. I’ve always purchased two copies of every Fall Preview issue. That way I have a backup in case something happens to the first copy. I’ve finally decided it’s just not worth buying and storing two copies. One is enough.

I like the cover to this year’s Fall Preview issue, although it does look an awful lot like last year’s cover.

Rather than list new shows by night of the week, TV Guide decided to group all the new shows into categories: Reboots and More!, Fish Out of Water, Workplace Drama, Ensembles, Bad Romance, Blockbuster Leads, Family Fun, and Strange and Unexplained. It’s a ridiculous and confusing way to present new shows, if you ask me. The night-by-night breakdown is logical and simple.

As has been the case for years, the amount of space devoted to each show varies from a two-page spread to a brief paragraph. Magnum P.I. (CBS) and A Million Little Things (ABC) are both given two-page spreads. Five shows in the Reboots and More! category, including The Miniaturist (PBS) and Charmed (The CW) each get a few sentences. There are some interviews scattered throughout the Fall Preview section. Look for the “Watch My Show” logo.

Bonus! Watch commercials for the 1962 and 1979 Fall Preview issues.

Are you still a TV Guide subscriber? Do you collect Fall Preview issues? Hit the comments with your thoughts.