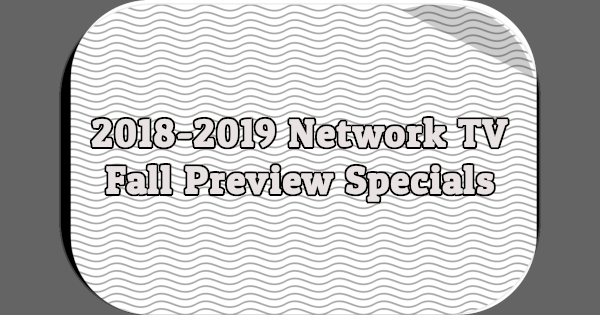 We’re only a few weeks away from the start of the 2018-2019 television season. The broadcast TV networks are hard at work promoting their new and returning shows. That means fall preview specials. So far, I’ve found information about CBS, NBC, and FOX specials but not ABC. I haven’t found any of them online yet. If you have cable check On Demand to see if any of the specials are available.

Last season, ABC, CBS, NBC, and FOX all produced fall preview specials. Both ABC and CBS aired theirs nationally; NBC and FOX made their specials available to affiliated stations.

As has been the case for years, CBS will air a half-hour fall preview special in prime time. “CBS Fall Preview” is scheduled for Monday, September 10th from 8:30-9PM ET. The special will also air live on CBS All Access. Co-hosting the special are stars from each of the network’s six new fall shows: Candice Bergen (Murphy Brown), Cedric the Entertainer and Max Greenfield (The Neighborhood), Brandon Micheal Hall (God Friended Me), Jay Hernandez (Magnum P.I.), Missy Peregrym and Zeeko Zaki (FBI), and Damon Wayans Jr. and Amber Stevens West (Happy Together).

“CBS Fall Preview” will be available through the middle of October across a range of CBS platforms, including cable channels, local affiliate websites, and more. A full press release can be found here.

Update: You can watch “CBS Fall Preview” online at the CBS website.

A half-hour version of the special, titled “NBC Primetime Preview,” began airing on NBC affiliates in mid-August, as well as cable channels like USA Network, CNBC, and Syfy. It includes shorter previews of NBC’s new shows and is missing sneak peeks of returning shows like Blindspot and Midnight, Texas.

Jessica “Jess Hilarious” Moore hosts the “2018 FOX Fall Preview” special, which started airing on FOX affiliates in the middle of August. Moore is one of the stars of the new FOX sitcom Rel.

Hit the comments with your thoughts on these fall preview specials and be sure to check your local TV listings.