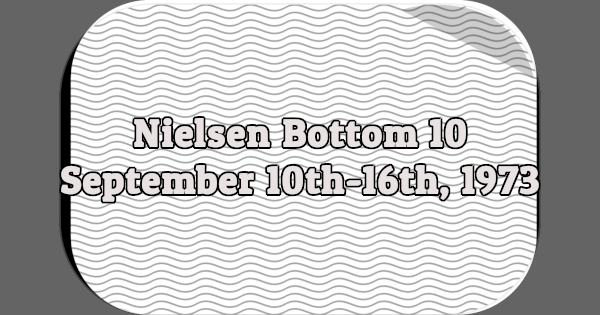 Last fall, I started posting the weekly Bottom 10 programs from the 1972-1973 season. Today, I’ll start doing the same thing with the 1973-1974 season. However, I only have access to complete weekly rankings and ratings, courtesy of The Los Angeles Times, for the first 15 weeks of the season. So, that’s where I’ll have to stop.

As was the case with the 1972-1973 season, I won’t be providing much in the way of analysis each week. I’m leaving that up to my readers. But I will offer details on any specials, news, or sports programs that are in the Bottom 10 each week.

We kick things off with the first week of the 1973-1974 season. It began on Monday, September 10th, 1973 and ended on Sunday, September 16th, 1973. The highest-rated program was Planet of the Apes (broadcast as an installment of The CBS Friday Night Movies) on CBS with a 33.6/57 Nielsen rating/share. Here are the 10 lowest-rated programs:

ABC aired unsold sitcom pilot “The Furst Family of Washington” on Tuesday, September 11th from 8-8:30PM. The network reworked the concept into That’s My Mama starring Clifton Davis and Theresa Meritt. It premiered in September 1974.

NBC carried the seven-hour “America Goes Public” telethon raising money for the Democratic National Committee live on Saturday, September 15th from 7PM to 11PM ET and from 11:30PM to 2AM ET. The telethon was extended to an eighth hour at the last minute. I’m not sure if NBC aired the extra hour.