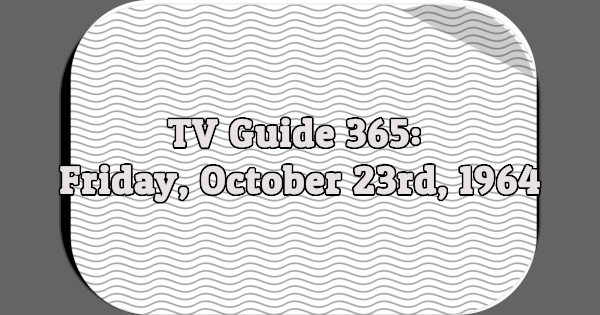 JONNY QUEST (ABC)
[COLOR] “Treasure of the Temple.” The Quests set off to check out a rumor that a treasure is hidden in the lost city of Malatan.

8:00 FARMER’S DAUGHTER–Comedy (ABC)
“Love on the Picket Line.” A teen-ager, determined that 18-year-olds should be given the right to vote, stages a hunger strike in front of Glen’s house.

BOB HOPE (NBC)
[COLOR] “The Turncoat” is young Victor Thornton, a defector to the Chinese during the Korean War. Now, with forged credentials, he’s en route to a missile plant to do the job of espionage he was groomed for. John Furia Jr.’s script is based on a story by Philip Freund. (60 min.)

ADDAMS FAMILY–Comedy (ABC)
Morticia and Gomez are entranced because newlyweds have moved in next door. The new neighbors, however, are horrified by the Addams family.

9:30 GOMER PYLE, USMC (CBS)
A troublemaking bully transfers into the outfit, and immediately sizes up Gomer as a patsy.

JACK BENNY–Comedy (NBC)
Bob Hope is Jack’s guest tonight. When Bob drops by, Jack springs a great idea: the two should team up to cut a comedy record album.

12 O’CLOCK HIGH–Drama (ABC)
“The Climate of Doubt.” Savage strenuously objects to General Crowe’s decision to send one bombing group over the two targets, but despite his misgivings, the mission goes ahead as planned. Script by Harold Jack Bloom. (60 min.)