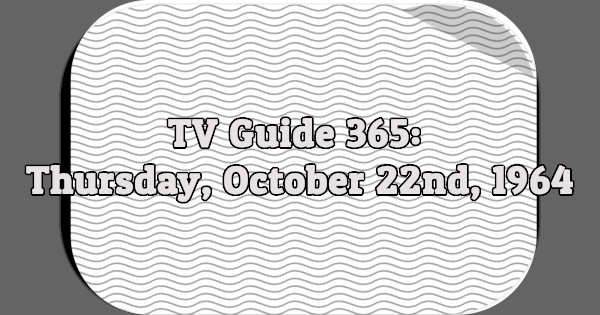 7:30 MUNSTERS–Comedy (CBS)
“Pike’s Pique.” The gas commissioner’s men are afraid to return to work after accidentally digging into the Munsters’ cellar and confronting Herman. But Commissioner Pike is confident that he can straighten things out by seeing Herman personally.

DANIEL BOONE–Adventure (NBC)
“A Short Walk to Salem.” Simon Girty plays dirty, and so do his three hard-hearted sons. They plan to relieve the Boonesville settlers of their season’s take of furs. (60 min.)

FLINTSTONES (ABC)
[COLOR] Fred is furious because he hasn’t been invited to his boss’s party.

8:00 PERRY MASON–Drama (CBS)
“The Case of the Betrayed Bride.” Nellie Meacham’s husband died while both were touring Europe, and now members of the family are at the airport to greet the returning widow. But they’re a bit shocked when Nellie steps off the plane with a new husband. (60 min.)

DONNA REED (ABC)
“The Tycoons.” Alex does well on his first stock investment, so Dave decides to try his luck.

8:30 DR. KILDARE–Drama (NBC)
“What’s Different About Today?” Kildare is spending a week as doctor at a camp for diabetic children, and one of his problems is Sandy Kimball, a surprisingly mature teen-ager who can’t reconcile herself to her ailment. Script by Jerry McNeely. (60 min.)

MY THREE SONS–Comedy (ABC)
Steve decides to get some work done over the weekend by taking a business associate on the Moose Patrol outing.

9:30 HAZEL (NBC)
[COLOR] “Welcome Back, Kevin.” Hazel plays Cupid again when she plans a surprise party for the Baxters’ nephew Kevin, who has just returned from the service.

PEYTON PLACE (ABC)
Rodney and Betty are injured in an auto accident, and Rossi is called in to attend.

10:00 DEFENDERS–Drama (CBS)
“Conflict of Interests.” The Prestons are attorneys for a British drama critic who’s suing an angry young playwright for libel, and they find that opposing the playwright’s female lawyer is a real battle of the sexes. Script by Ellen M. Violett. (60 min.)

KRAFT SUSPENSE THEATRE–Drama (NBC)
“A Lion Amongst Men.” Maj. Will Stanton is a retired army officer who thinks American youth need training and discipline–something like Germany’s youth received in the 1930’s. Script by Antony Ellis. (60 min.)