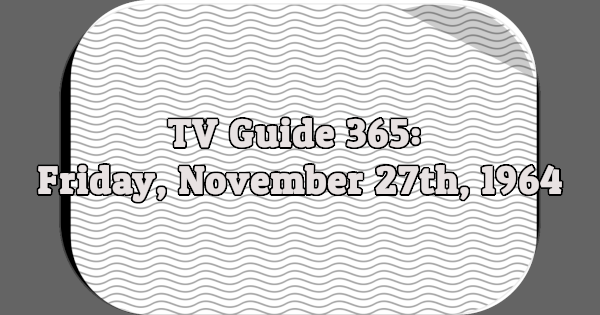 7:30 RAWHIDE–Western (CBS)
“The Backshooter” appears to be Rowdy, who brings in the body of an outlaw–shot from behind–and asks for the reward money. (60 min.)

JONNY QUEST (ABC)
[COLOR] “Skull and Double Crossbones.” The Quests tangle with pirates on the high seas while searching for sunken treasure.

8:00 FARMER’S DAUGHTER–Comedy (ABC)
Katy finds that being “The Neutral” is difficult when Papa Holstrum comes to town–he’s determined to influence Glen on a political issue.

BOB HOPE (NBC)
[COLOR] “Parties to the Crime.” Excon Barry Stinson has been spending enough time at church to make it appear that he’s been converted, but veteran policeman Joe Masson suspects Stinson may be planning to knock over the seminary post office. Script by William Wood. Bob Hope is host. (60 min.)

9:30 GOMER PYLE, USMC (CBS)
The colonel’s daughter needs a date for the base dance, and girl-shy Gomer gets the assignment.

JACK BENNY–Comedy (NBC)
Rochester takes his first vacation in 20 years, and then thinks he’s being replaced when he spots an ad stating that Jack’s looking for a housekeeper.

General Savage is physically and mentally exhausted, and General Crowe orders him to take a two-week rest leave. “Get as far away as you can without deserting,” Crowe tells him.