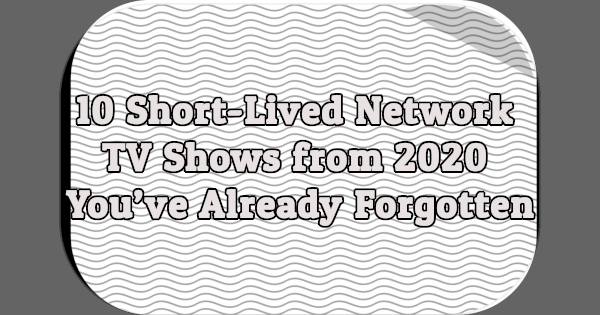 You can expect my annual list of the “new obscurities” from the past year sometime next week. Until then, here’s a brief look at ten short-lived network TV shows from 2020 that you (and most viewers) have already forgotten. How many did you watch?

Although I didn’t watch Lincoln Rhyme: Hunt for the Bone Collector, I know I caught a few minutes of an episode because I recognized Russell Hornsby from Grimm. That’s a few minutes more than any of the other TV shows listed below.

I actually planned on watching Outmatched because I’m a fan of Maggie Lawson from USA Network’s hilarious Psych. I watched her two previous network sitcoms–Back in the Game (ABC, 2013) and Angel from Hell (CBS, 2016)–but the promos for this one were underwhelming and I ultimately decided not to tune in.

I’m sure I saw a few promotional spots for this sitcom but don’t remember much about it.

Again, I know I saw some promos for Council of Dads but have only the vaguest idea what it was about.

I don’t remember seeing any promos for Broke but I do recall reading a few articles about it and how it was Pauley Perrette’s return to television after leaving NCIS.

The Baker and the Beauty (ABC)

I honestly thought The Baker and the Beauty was a reality show when I saw the title in TV listings. It wasn’t until the show was cancelled that I learned it was a scripted series based on an Israeli series.

This short-lived sitcom came and went in just seven weeks because ABC aired the first two episodes back-to-back. I don’t think I saw any promos for it nor do I have any idea what it was about.

Filthy Rich has the distinction of being the first new scripted network TV series to debut at the start of the 2020-2021 television season. Although the network cancelled Filthy Rich in late October, it remained on the air for another month, finishing out its 10-episode order.

Like Filthy Rich, FOX cancelled neXt in late October. The network had only aired two episodes before making the decision to axe the sci-fi drama. The series finale aired just weeks ago on December 22nd.

Yes, NBC briefly aired sitcom set during the ongoing COVID-19 pandemic in which the characters are shown video chatting with one another while safely socially distancing. Four episodes aired before the network pulled the plug. The remaining four episodes debuted online.

How many of these TV shows did you watch? How many had you heard of before reading this post? Any of them? Be sure to check back next week for my comprehensive review of short-lived network TV shows from 2020.