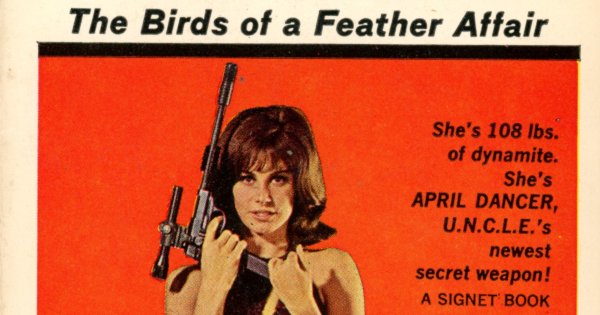 The Girl from U.N.C.L.E. #1 – “The Birds of a Feather Affair”
By Michael Avallone
First Published September 1966
Published by Signet Books
128 Pages

I’ve mentioned before that I’m a big fan of The Girl from U.N.C.L.E. (you can read my article about the series here and my review of the show’s soundtrack from Varase Sarabande here) so its about time I got around to reviewing one of the five tie-in novels connected to the series.

Only two novels were published in the United States with three others only seeing print in the United Kingdom (plus one duplicate).

I’ve only read the first novel published in the United States but hope to eventually read all the others. Unfortunately, the three novels only published in the United Kingdom can be pricey. The Birds of a Feather Affair is easily one of my favorite tie-in novels of all time and not just because it’s a bit racy. The story is engaging and more serious than most episodes of the show itself. I actually have two copies of The Birds of a Feather Affair, one of which is in pretty sad shape. Someone traced the U.N.C.L.E. logo in pencil over and over again. And it is creased quite nicely. Notice that Stefanie Powers’ name is spelled incorrectly as Stephanie Powers on the cover.

In my review of The Man from U.N.C.L.E. #3 – The Copenhagen Affair I mentioned the story was somewhat more violent than the television show. With The Birds of a Feather Affair it’s not just the violence that has been altered. Poor April Dancer spends some twenty pages in her underwear after being captured by THRUSH agents and stripped of any weaponry or possible piece of U.N.C.L.E. technology (including a specially designed under wire). And for some reason, on a handful of occasions April takes the time to notice how attractive one of her THRUSH adversaries is:

The redhead moved ahead. Tall, vibrant and athletic. Her figure was enviable. April shook her head, watching the sensuous twitch of buttocks beneath the beige skirt. The legs were superb, too. Miss Van Atta was a body built for bed.

Still, although more risque than the television series, The Birds of a Feather Affair isn’t all that adult. Sure, April alludes to Mark Slate’s way with the ladies in a roundabout fashion and she wears a few skimpy dresses, but that’s about it. Like the show, though, the novel is fairly sexist. April is a woman first and an U.N.C.L.E. agent second, having only one speciality that male agents like Napoleon Solo and Illya Kuyankin don’t have: “If a female enemy agent walked into the powder room, April Dancer could follow her.” She does handle a gun like a pro, though, and saves plenty of lives.

The novel opens with April awkwardly perched on the ledge of a building in high heels, wrapping up a mission. She is then asked to swing by Mark’s apartment. She doesn’t find him but instead encounters a lovely red head and a deadly snake. She kills the snake and suspects the woman but unfortunately she is soon knocked out and captured by the woman and a pair of her associates. All THRUSH. She awakens, sans clothes, next to Mark. They’ve been abducted by THRUSH to be used as bargaining chips for a scientist named Alek Zorki held by U.N.C.L.E.

Mark and April are able to blow a hole in the wall of their prison cell using explosive scrapped off their toenails (U.N.C.L.E. thinks of everything) but during the ensuing confusion Mark is captured again while April is left to die when the hallway she is in explodes. She finds a woman named Joanna Paula Jones stuffed in a locker, pulls her out and then prepares them both by filling the hallway with water. It successfully absorbs much of the explosion but the two are thrown out of the building.

April makes her way back to U.N.C.L.E. headquarters, helps free Mark from the clutches of the sadistic Miss Van Atta, returns to headquarters, meets up with Joanna again and then helps hunt down Zorki and a traitorous U.N.C.L.E. agent as they attempt to escape via a helicopter on the roof. Both are killed and April takes Joanna back to her apartment for the night. Unfortunately, they run into the female THRUSH agent (who masqueraded as a man) who oversaw the attempt to get Zorki back. She kills Joanna and then escapes, leaving April inconsolable (she sits down and has “a good, long woman’s cry” before berating herself for being female).

As someone who likes The Girl from U.N.C.L.E., The Birds of a Feather Affair was a fun read and the blatant sexism was easily ignored as a product of its time. And though April may be a woman, she’s still a stellar and deadly agent.