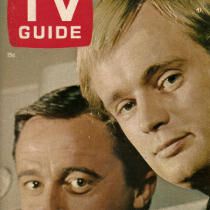 On the Cover: Robert Vaughn and David McCallum (photograph by Gene Trindl).

This feels like a very light issue because it contains only two real articles, the cover article about actor David McCallum and the second installment of Leslie Raddatz’s examination of “adult” films on TV. A third article consists entirely of excerpts from a new book collecting letters written by the late Fred Allen. There is also a one-page profile of actress Sally Kellerman which isn’t much of an article.

It’s a little odd that the cover features both McCallum and Robert Vaughn from NBC’s The Man from U.N.C.L.E. when the article is only about McCallum. I can’t believe there weren’t any promotional photographs available of just McCallum. Somebody must have made the decision to include both on the cover. According to the article, the two aren’t best buddies but respect one another and Vaughn doesn’t have a problem with McCallum being so popular.

The article gives a few examples of what poor McCallum has to put up with now that he’s a sex symbol: being met by 50 girls in Dallas, one of whom kisses him after asking if his wife (Jill Ireland) minds; having to be rescued from a crowd of 2,000 coeds by police at Louisiana State University; and being mobbed by 500 teenagers at an airport in Illinois. The fact that he’s married and has three children doesn’t seem to bother any of his fans. He considers being called a sex symbol disquieting.

[No disrespect to McCallum but I just can’t see him as a sex symbol. Then again, I was never a teenage girl so what do I know.]

In last week’s issue, Leslie Raddatz worried about movies like Kiss Me, Stupid, The Carpetbaggers, and Walk on the Wild Side airing on television. In this second of three installments, he explores how the government might intervene to protect the public. Connecticut Senator Thomas J. Dodd, head of the Senate Subcommittee to Investigate Juvenile Delinquiency, has this to say:

When I was a kid, there were hootchy-kootchy dancers at the carnivals that came to town, but the whole town didn’t turn out to see them. Now if the trash of the film industry gets on television, it will add a new complexity to an already complex situation. It will require a whole new look at the television industry by Congress and the FCC.

He admits it would be “a very sticky area” due to the First Amendment. Other politicians have similar feelings, with some hoping the FCC will take charge while others point out that the FCC has no authority to do so. It would be best if the television industry would self-regulate. Senator Dodd feels it is unlikely the industry will do so. If it does, it will be through the Code Authority of the National Association of Broadcasters, led by Howard H. Bell. The problem of sex and sensationalism is not lost on him:

We don’t want to take a holier-than-thou attitude. We don’t want to be a super-censor and stifle the creative artist. But in our own area we must take action. If the sex pictures did go on, the public outcry would be tremendous–the hue and cry would be head all the way from Hollywood to Capitol Hill.

Unfortunately, the NAB Code Authority can’t do much other than revoke the Code Seal from any stations that ignore its rulings (only 70% of the country’s TV stations are subscribers). To date, this hasn’t happened due to the content of programs. A previous director of the NAB Code Authority, Robert D. Swezey, argued upon resigning that maintaining industry standards is impossible because of “the poor programming and shoddy practices of a large element of the industry which has no interest in standards and no compulsion to observe them.” Next week, Raddatz will reveal what the networks have to say.

The four pages of excerpts from Fred Allen’s Letters are a little hard to read. Not because they’re the letters of a dead man but because Allen didn’t capitalize anything and enjoyed run-on sentences. The excerpted letters are to Groucho Marx, Alton Cook, and Hal Kanter and range in date from March 1949 to three days before Allen died in March 1956. The March 1949 letter to Groucho Marx is interesting. Allen first insists that Marx is not to blame for killing vaudeville, movies, and radio. He then suggests that if Marx wants to “give television the buss of rigor mortis” he should hurry because “after the last coupe of berle [sic] shows, guys in this section have been dragging television sets out into the yards and burying them.”

Finally, there is a brief one-page profile of actress Sally Kellerman, opposite a full-page color photograph. I’ve only seen a few things she’s been in but still can’t believe I didn’t recognize her. The profile was written in such a way that her identity literally wasn’t revealed until the last line. I actually skipped ahead when it wasn’t explained right away who was being profiled.

The “As We See It” editorial this week discusses a comment made by Hugh Downs of NBC’s Today about the television industry setting up a plan to prevent programs of “deep interest and genuine educational value” from being scheduled opposite one another. TV Guide suggests an alternative:

Unfortunately, competition is a dream, so TV Guide reluctantly supports the Downs plan. “Let’s not waste what few extraordinarily good programs are broadcast by permitting them to be scheduled at the same time.”

Cleveland Amory’s review of ABC’s documentary series FDR is very positive. He praises the “masterful blending job of interviews, stills and films” by the producers (Robert Graff and Bob Feiner, Jr.) as well as Charlton Heston’s reading of FDR’s words. He especially likes how the series shares FDR’s humor with viewers. He is worried, however:

Based, of course, largely on news footage, it illustrates both the wonders and dangers of film. For though film brings history wondrously alive, it also illustrates the narrowness of television’s, and the newsreel’s, conception of “news.” If we aren’t careful, future generations, seeing history this way, will think of it as nothing more than a handful of prancing personalities.

[I wonder what Amory would have thought of the PBS/Ken Burns documentary series The Roosevelts, originally aired last September. More prancing personalities?]

Rounding out the national section is a two-page picture feature depicting Broadside star Kathy Nolan tickling McHale’s Navy co-star Joe Flynn in the Universal Studios commissary, related to the January 9th article about Nolan and the February 20th letter from the cast of McHale’s Navy responding to her comments. There is also a TV Jibe comic strip and the regular TV crossword puzzle.

There were three news reports in the “For the Record” column in the listings section this week, although one was more opinion than news:

The letters page this week included three responses to Leo Rosten’s “If I Had a Network” essay from the April 3rd issue, two of which were from employees of TV stations:

Leo Rosten probably didn’t realize it but his point No. 6 of “If I Had a Network” … concerning a local letters to the Manager” program [is] almost verbatim the manner in which we have conducted our local efforts weekly for nearly four years. His suggested format was a carbon copy of [General Manager] Mike Shapiro’s … program.
Casey Cohlmia
Promotion Manager, WFAA-TV
Dallas

As a viewer I would be glad to invest my all toward buying Leo Rosten a network. Any other subscribers?
Mary Harris
Fulton, Mo.

Leo Rosten’s suggestions for upgrading TV programming are praiseworthy, but some are far from unique. The operation of a night court or the harbor police are hardly “unexploited reservoirs.” Both have been made into TV series–and a telephone exchange has been the setting of at least one TV drama that I can remember. The plays of Galsworthy, Pinero and Wilde have not been unknown on television. … And they do have festivals where the year’s best TV commercials are judged–both here and in Europe.
Chris Steinbrunner
WOR-TV
New York, N.Y.

Other letters discussed Vince Edwards, Cleveland Amory’s review of The King Family, and That Was the Week That Was.

ABC’s coverage of Major League Baseball kicked off on Saturday, April 17th at 2PM. The games were regional; viewers in the Philadelphia area watched a game between the San Francisco Giants and the New York Mets. Chris Schenkel and Leo Durocher (former Dodger coach) were commentators for the game. Easter was on Sunday, April 18th and both CBS and NBC aired special religious programming to mark the occasion. CBS pre-empted Lamp Unto My Feet at 10AM to air a half-hour special called “It’s a Mighty World,” featuring singer Odetta, then pre-empted Look Up and Live and Camera Three for a live 90-minute Easter service from New York City’s St. Mark’s Church. NBC aired an hour-long live Easter service from Cincinnati’s Westwood Methodist Church at 11AM.

Also on Sunday, ABC repeated the “I, Leonardo DaVinci” episode of Saga of a Western Man at 4PM due to requests from viewers who missed it when it originally aired (because it was scheduled opposite “The Journals of Lewis and Clark” on NBC). Zoorama premiered on CBS at 5PM. At 7PM, CBS aired its latest hour-long Marineland Carnival special, this one featuring the cast of The Munsters and the New Christy Minstrels. Here’s an advertisement: 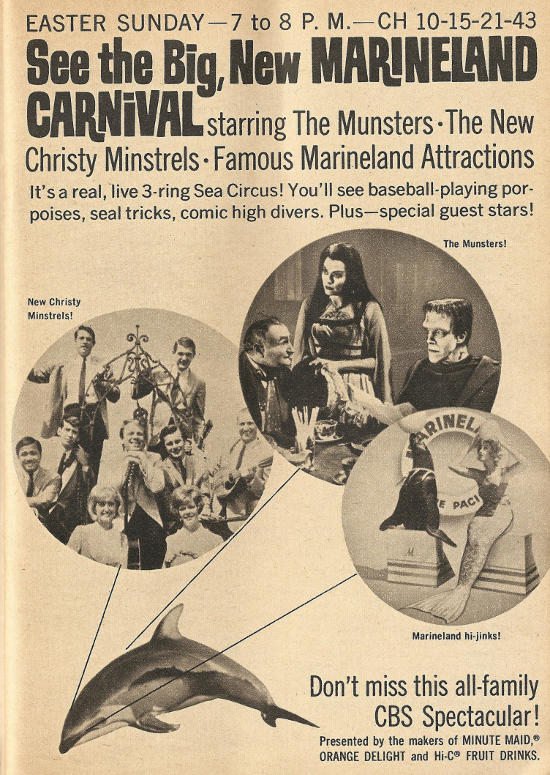 [Reportedly, no copies of this special are known to exist.]

On Monday, April 19th at 9:30PM repeats of The Danny Thomas Show replaced Many Happy Returns on CBS. At 10PM, CBS Reports examined the United Nations and its future, with Richard C. Hottelet interviewing U.S. Ambassador Adlai E. Stevenson. NBC aired an hour-long color special called “Our Man in Washington” from 10-11PM on Tuesday, April 20th. David Brinkley took viewers on a tour of the Capital and examined its history.

This is the second issue I had to purchase because for whatever reason it wasn’t kept by the relative who collected TV Guide from 1964-1965. The first was the October 24th, 1964 issue. I was able to acquire both that issue and this one from the same source, so both are the Philadelphia Edition. The listings include four CBS affiliates, two NBC affiliates, and ABC affiliate, and an educational station.

There is a ton of local programming included in the listings and there’s no way I can cover it all. But I’ll try to hit the highlights. On Saturday, April 17th Philadelphia station WRCV-TV (Channel 3) pre-empted NBC’s Mr. Magoo at 8:30PM for a half-hour special called “My Father, The Governor” in which seven of the ten children of New Jersey governor Richard J. Hughes opened up about their life as part of New Jersey’s First Family. Here’s an advertisement: 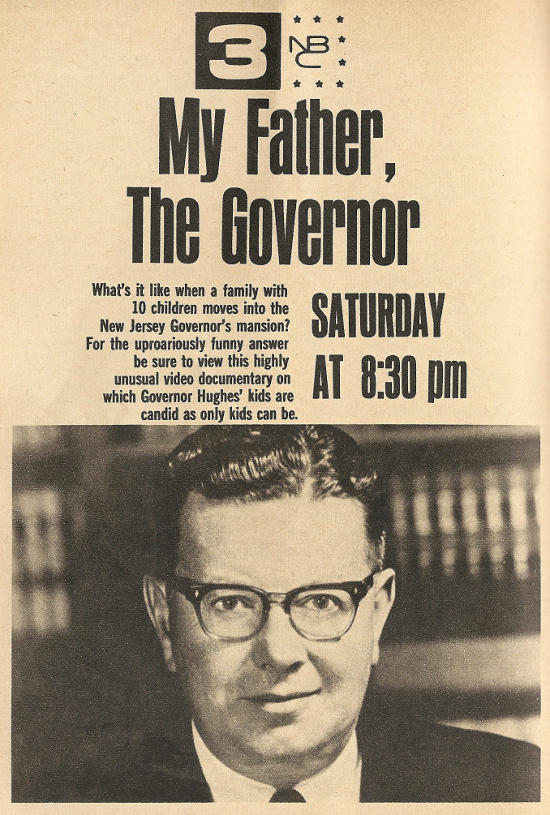 Advertisement for “My Father, The Governor” on WRCV-TV (Channel 3) – Copyright 1965 Triangle Publications, Inc.

On Sunday, April 18th WRCV-TV aired a half-hour special at 10:30AM called “Joy Forever” featuring Easter hymns sung by the Lansdowne Baptist Church Choir. At 12PM, the same station aired “Glory of God,” a half-hour of the Gloucester Catholic High School Glee Club out of New Jersey performing. WFIL-TV (Channel 6) out of Philadelphia and WGAL-TV (Channel 8) out of Lancaster broadcast a baseball game at 1:30PM between the Los Angles Dodgers against the Philadelphia Phillies. At 4:30PM, WCAU-TV (Channel 10) aired a half-hour Easter special called “Pixanne’s Easter Surprise” in which Pixanne and Windy the Witch narrated the story of Snow White. Here’s an advertisement: 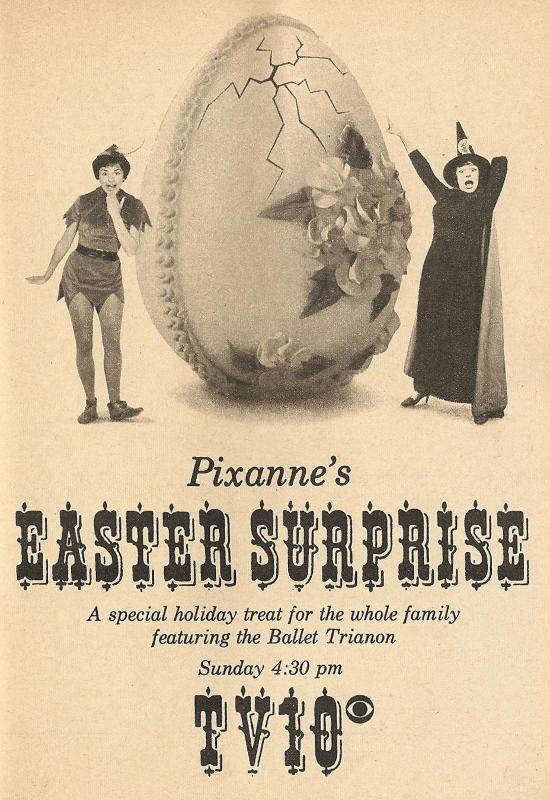