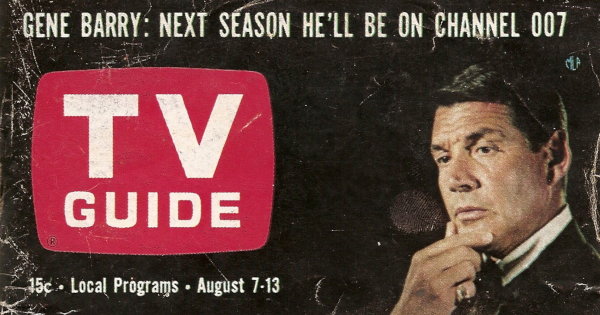 On the Cover: Gene Barry (photograph by Jim Collison).

This week’s cover article is noteworthy because it isn’t a typical profile of a television personality (in this case Gene Barry) but instead an article discussing why ABC’s Burke’s Law is being revamped for the 1965-1966 season as Amos Burke, Secret Agent. It was the network that suggested changing the tone of the series from a straight cop drama to a spy thriller. Tom McDermott, president of production company Four Star Television, insists that it wasn’t a response to the success of NBC’s The Man from U.N.C.L.E. and promises that Amos Burke, Secret Agent will “be more realistic and hard-hitting” without the “Mickey Mouse” elements. 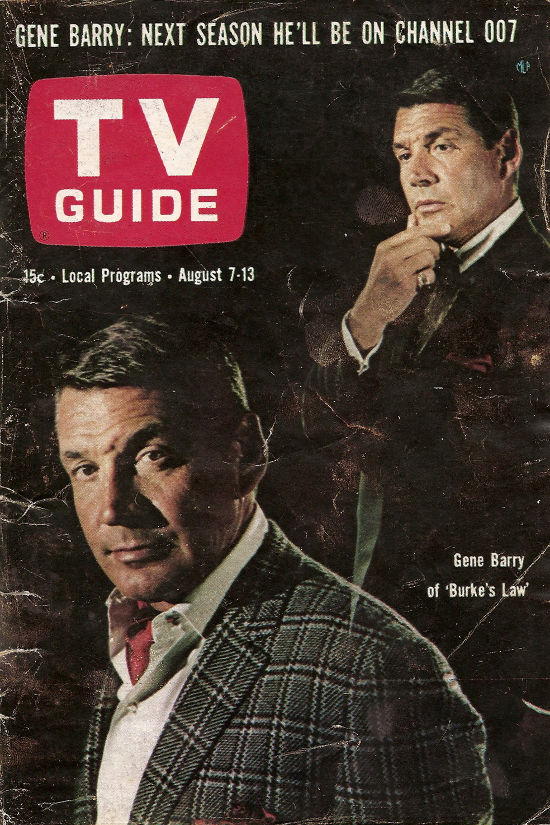 Barry agrees: “We’re an adult show, and next year we’ll be more adult–no gimmickry for the sake of gimmickry–strong stories that will grip you.” According to head writer Marc Brandel, the revamped series will “keep a firm hold on reality” with plots involving Charles De Gaulle and Nikita Khrushchev rather than fictional heads of state. But it will avoid “political plots” and attempts to push messages on viewers.

We want to keep the show on a high plane, and stay away from the Mickey Mouse situation. We won’t have Burke pull out a tooth and throw a bomb. We hope to be more cerebral than that. We’re gonna do stories that are fantastic, bigger-than-life, but plausible. We’ve got one about a guy who plans to rob New York, and another where a fellow blackmails the United States–and gets away with it.

Eddie Applegate, head of Four Star’s prop department, also spoke out against “Mickey Mouse” gimmickry. “I can’t stand scenes where someone walks into a delicatessen and the guy picks up a baloney which opens a secret door to this fantastically modern headquarters.” [Maybe Amos Burke, Secret Agent should have been a little more “Mickey Mouse.” The revamped series was a failure, running for just 17 episodes from September 1965 to January 1966.]

“Looking for a Pearl Peeler?” is an interesting article about researcher Kellam de Forest and the Kellam de Forest Research Service. He started the company in the early 1950s, setting up shop at Desilu Studios. His clients range from independent television production companies to individual TV writers to architects designing a new theme park. De Forest’s office holds more than 5,000 books. His staff consists of three young women who help him research anything from cigarette brands and fine vintages of French burgundy to names of characters and what day of the week a certain date in the future will fall on. The company has done research for more than 40 TV shows including I Love Lucy, The Richard Boone Show, The Twilight Zone, Profiles in Courage, Dr. Kildare, and Kentucky Jones.

Neil Hickey’s three-page article “He Plays It — Commercial” is a profile of trumpeter Al Hirt, currently starring in a 13-week CBS summer replacement for Jackie Gleason and His American Scene Magazine. Much of the article is the typical TV Guide profile chronicling Hirt’s career. Hickey touches upon criticism of Hirt from jazz purists who insist he is “the Liberace of the trumpet,” something Hirt himself will readily agree with. “I don’t consider myself a jazz player at all. I’m not out of the Dixieland tradition. I’m commercial.”

Al Hirt’s Fanfare debuted on June 19th. The variety show has a very limited budget. It is the first independent series to be produced by Sullivan Productions, headed by Ed Sullivan and his son-in-law Bob Precht. The hope is that if the show is a success, Sullivan Productions can push CBS to renew it “as a regular-season prime-time entry with a big budget–perhaps next January, after the weak shows have dropped out. We’ll be waiting around like vultures looking for a spot.” [It must not have been a success; Al Hirt’s Fanfare was not renewed.]

Finally, there is a three-page article about NBC producer Lucy Jarvis titled “Madison Avenue’s Miss Machiavelli.” Jarvis was responsible for convincing the Soviet Union to allow NBC to film in the Kremlin and French officials to let the network film in the Louvre. She was sent to Russia in June 1962 to commence negotiations and spent two months using “sheer manipulative wile” to move up the chain of Soviet bureaucracy, finally meeting face to face with Khrushchev who agreed to arrange everything for her. The same process worked for the Louvre as well. She started with a book publisher, moved to the chief curator of the Louvre and eventually got all the way to the French Minister of Culture.

Of course, both the Soviets and the French had their own motives for cooperating. Still, both “The Kremlin” (aired May 21st, 1963), which Jarvis co-produced, and “The Louvre: Golden Prison” (aired November 17, 1964), which she produced on her own, were well received by critics. Jarvis, however, has her detractors. There are those who feel she’s too aggressive and likes to drop too many famous names. Her next project? A documentary about artificial kidneys.

Cleveland Amory reviews Daniel Boone and is not kind with his criticism. “If you’re a small child,” he writes, “and you love Westerns, and you haven’t got anything else to do, you’ll just about be able to stand it.” He doesn’t like the acting or the writing or the characters. “All in all, the good guys on this show are such bad actors that one way we have found to enjoy it is to root for the bad guys, who are, at least sometimes, good actors. This isn’t a foolproof method, however.”

Rounding out the national section is a recipe for barbecue burgers as well as the regular TV crossword puzzle.

The letters page includes seven letters, including this lengthy one from a viewer defending her viewing habits:

Before another TV season begins, and the critics begin telling us how stupid the American public is in its choices, I would like to say my little piece. I went to college, my IQ is respectable, and I love good theater, ballet, opera, symphony music and the like. Our home is cluttered to the rafters with good books and we pay outrageous sums for fine records … but heaven deliver me from arty TV. The answer lies in concentration. When we see a legitimate play, a movie, an opera, etc., we go to a hushed and darkened theater, where every motion and every line is clear. But what normal, average household in America is ever that quiet for even one half hour at a time?
Shirley W. Smith
Reidsville, N.C.

Then there was this letter about The Addams Family:

Why is it that a show about weirdies, The Addams Family, presents the best husband-wife relationship on television? Or have I already answered my own question?
Doris D. Durnan
Trenton, N.J.

[This is the last issue in my 1964-1965 TV Guide collection inherited from a family member. The collection runs from August 1964 to August 1965 rather than from September to September. I’ve purchased copies of several additional issues to continue A Year in TV Guide into September.]

It was another quiet week for the networks. ABC’s regular 2PM baseball game on Saturday, August 7th was once again listed as “To Be Announced.” Summer Playhouse on CBS on Monday, August 9th at 8:30PM presented an unsold sitcom pilot called “Hello Dere!” starring Marty Allen and Steve Rossi as TV reporters trying to land an exclusive interview with a Russian official. Allen pulled double duty and also played the Russian official.

Locally it was a slightly busier week. At 2PM on Saturday, WPRO-TV (Channel 12) aired an exhibition football game between the Washington Redskins and the Philadelphia Eagles. At 2:30PM, WHDH-TV (Channel 5) aired a baseball game between the Boston Red Sox and the Minnesota Twins. At 4:30PM, WPRO-TV aired the Whitney horse race from Saratoga Springs, NY. WTIC-TV (Channel 3) also aired the race, joining coverage in progress at 5PM, while WHDH-TV either joined in progress at 5:30PM or aired the race from tape. At 10:30PM, WNAC-TV (Channel 7) pre-empted the second half of ABC’s The Hollywood Palace to air “The Old Ball Game,” an hour-long documentary about baseball.

On Sunday at 11:30AM, WNHC-TV (Channel 8) aired a salute to Pittsfield, MA on its half-hour Comments and People series. From 12:30-1PM WTIC-TV examined the history and development of the Central Baptist Church in Hartford on We Believe. WPRO-TV aired a Baltimore Colts intersquad football game taped the previous night from 2-4:30PM. Two different baseball games aired at 2PM: another Red Sox-Twins game on WHDH-TV and a game between the New York Yankees and the Detroit Tigers on WNHC-TV. At 4:30PM, WBZ-TV (Channel 4) and WPRO-TV aired live coverage of the Philadelphia Golf Classic. WNHC-TV was scheduled to pick up the golf tournament after the Yankees-Tigers baseball game ended.

On Monday, WGBH-TV (Channel 2) aired a documentary film titled We’re Moving to Boston from 7:30-8PM about two families moving to the South End of Boston. WHDH-TV and WPRO-TV aired a baseball game between the Baltimore Orioles and the Boston Red Sox at 8PM on Tuesday. WHDH-TV aired another Orioles-Red Sox game at 7:30PM on Wednesday. WGBH-TV aired a polo match from 7:30-9:30PM on Thursday. WNAC-TV (Channel 7) pre-empted ABC’s Jonny Quest and The Donna Reed Show from 7:30-8:30PM for a special called “Big Night Out” featuring The Beatles, Jackie Trent, and the Lionel Blair dancers. 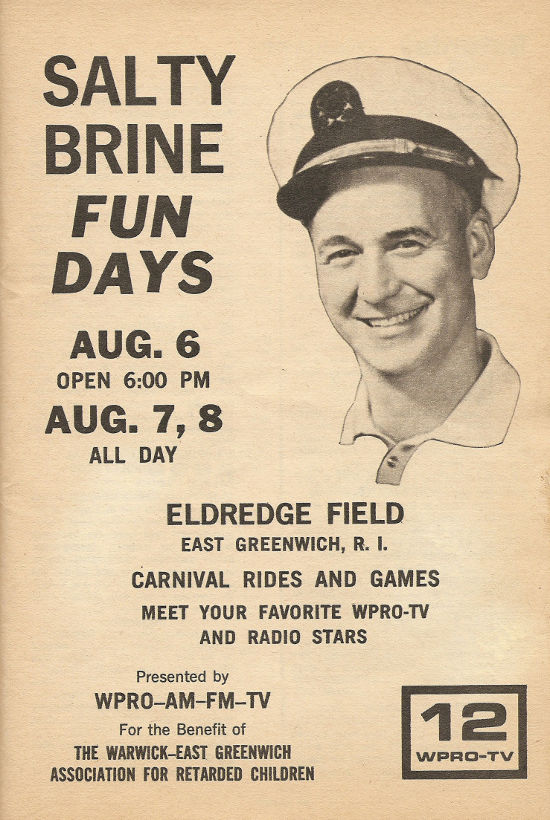 Here’s an advertisement for The Big News on WNAC-TV (Channel 7): 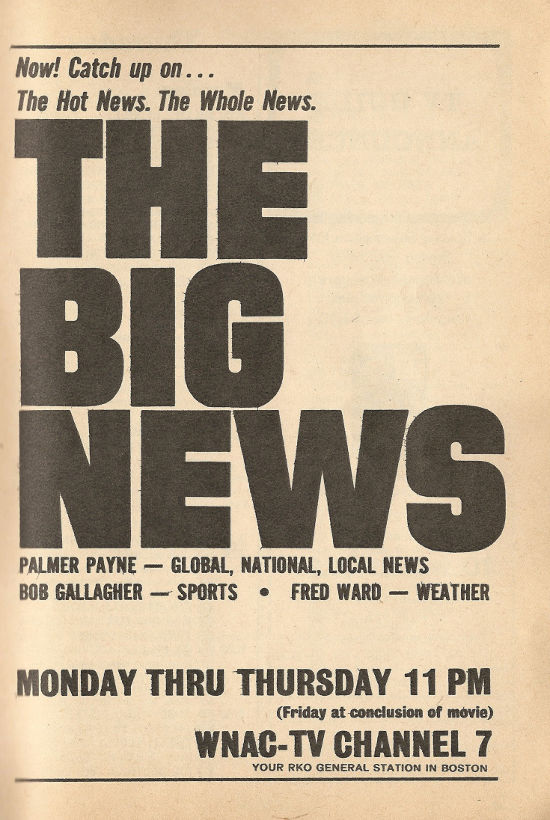 Friday, August 13th, 1965
The arts and customs of Spain are illustrated.