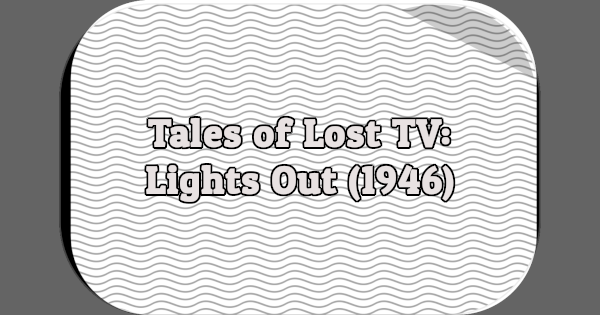 Long-running radio drama Lights Out began as a local Chicago series in January 1934. Wyllis Cooper created the horror series, which originally aired on WENR. In April 1935, it began airing nationally on NBC, with Cooper serving as host, writer, and director. When he departed in 1936, Arch Oboler replaced him. NBC continued airing Lights Out until August 1939. The series moved to CBS in October 1942, where it remained until September 1943.

Lights Out returned to NBC for summer runs in 1945 and 1946. Following a brief summer run on ABC in 1947 with Boris Karloff, Lights Out left radio for good.

In July 1949, NBC debuted a live weekly television anthology series based on Lights Out. It ran for three seasons and more than 150 episodes, ending in September 1952. Broadcast live, it featured guest stars like Jack Palance, Ross Martin, Jonathan Harris, Leslie Nielsen, Anne Francis, Eva Marie Saint, and Borlis Karloff. About a dozen episodes have been released on DVD by Alpha Video.

But the 1949-1952 anthology series wasn’t the first attempt to bring Lights Out to television.

Between June and October 1946, NBC broadcast four live Lights Out specials over its flagship station in New York City, WNBT. Personally, I don’t think these specials can be considered a TV series, because they didn’t air on a regular basis. But that’s just me. Fred Coe produced all four specials and directed at least one. He also adapted three scripts for television and wrote a fourth on his own.

The first Lights Out special aired on a sustaining basis, without a sponsor. The remaining three presumably did as well.

Scripts for the four specials may survive but no kinescopes or audio recordings are known to exist. Fortunately, contemporary reviews of “First Person Singular” and “Something in the Wind” offer a glimpse at these otherwise lost television specials.

The first Lights Out special received lavish praise from Variety and Billboard following its June 30th, 1946 broadcast. The drama aired from 8:50-9:10PM ET with Fred Coe producing and Bill States directing. Some sources indicate “First Person Singular” was an original teleplay by Wyllis Cooper. However, Billboard states he originally wrote the script for the radio version of Lights Out when it was a local Chicago series.

“First Person Singular” told the story of an unhappy marriage, a murder, a trial, and an execution. Viewers saw the action from the point of view of the killer, with the camera serving as his eyes. Here’s how Billboard described the production:

Coe handled the cameras so that they were you–the murder of your wife, a slut. When you were hung the screen went black, but as you were dying you saw the coolness of the waves breaking on the beach. He used a kaleidoscopic circle every time your, the murderer’s, mind went blank.

Variety put it this way:

Coe achieved some admirable effects with the camera, drawing the viewer both into the killer’s mind and into the action. Use of a spiral montage effect bridged the gap between scenes very well and the integration of film to point up the killer’s dream of a cool, placid existence and to heighten the shock effect as the hangman ended his life was excellent.

Carl Frank provided the voice of the killer, allowing viewers to hear the inner monologue of a man driven to murder by the incessant nagging of his wife. Mary Wilsey played the wife. “Her whining voice and little side-touches such as picking her teeth with her finger, all heightened by ultra-realistic makeup, brought forth a woman that even a sane husband might have wanted to kill,” Variety‘s review declared.

Billboard likewise praised Wilsey’s performance “Katherine, the wife, was supposed to be a first-rate bitch and slattern, and Wilsey didn’t for once try to pretty her up. She was Katherine and she deserved to die.”

The two reviews of “First Person Singular” paint a picture of a truly remarkable television production. Variety began its review with the following paragraph:

It’s usually considered in bad taste for a reviewer to use superlatives in describing a show. Sometimes, however, such a course of action cannot be helped, as in this first televised version of the w.k. “Lights Out” radio spine-tingler. Utilizing a new device in which the camera itself is the murderer, the program was tops from start to finish and undoubtedly one of the best dramatic shows yet seen on a television screen.

Here’s how Billboard started its review:

NBC tried the most difficult job in video today. It took a radio script, which was supposed to depend entirely upon the listener using his imagination to reconstruct what was being aired, and gave the listener eyes. The odds were 10 to 1 that it wouldn’t come off.

It came off. Fred Coe, the producer-adapter, did a terrific job, the best he’s done to date, and, frankly, as good as anything that NBC’s cameras have scanned since they’ve been using channel four.

Both reviews did find something to criticize. Billboard lamented the hour at which “First Person Singular” aired, feeling it inappropriate for younger viewers. And Variety felt Bob Wade’s sets weren’t “as spectacular as in other shows” but “fit the program well.”

According to Variety, “First Person Singular” ended with announcer Bill Woodson asking viewers if they’d like to see Lights Out as a weekly TV series.

Fred Coe wrote and directed the second special (“Something in the Wind”), which focused on a television director who revises a script, removing certain lines or entire characters. His conscience begins to bother him, however, and soon two of these characters come to life. The cast included Everett Gammon, Michael Blain, Richard Goode, James Rafferty, Larry Semon, and Mary Alice Moore.

“It was a Coe original, and it was not as sock as the first of the series,” Billboard announced in its review. Perhaps expectations were too high following the well-received first special. The directing was better than the writing, the review concluded. “Coe used a number of standard shockers […] but while the seg was beyond question entertainment, it wasn’t genius.”

(Billboard did appreciate WNBT airing “Something in the Wind” at 9:30PM ET, late enough for kids to be in bed.)

The review concluded with a final thought: “No man should direct his own original–it’s too big a job–but Fred Coe almost licked it.”

I’ve been unable to find reviews for the remaining two WNBT specials: “De Mortius” from September 1946 or “The Brave Man with a Cord” from October 1946. Nor do I know why the station opted to air them irregularly rather than as a weekly series. It probably had to do with costs and other production considerations.

Do you know anything about Lights Out? Are scripts available for any of the specials? Does critically acclaimed “First Person Singular” sound like exciting television? Hit the comments with your thoughts.