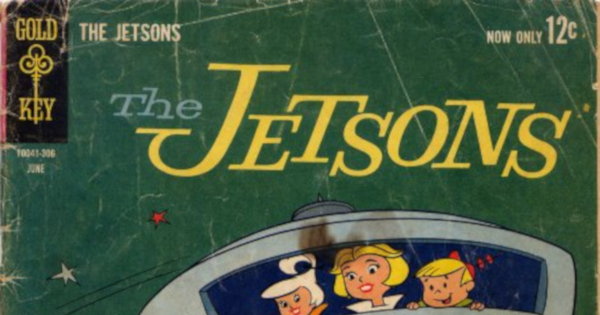 As you can see, my copy of The Jetsons #3 is in pretty sorry shape. I’m not sure exactly what is going on in the middle of the cover above Judy and Jane. Some sort of burn? An ancient coffee stain? Even without the mysterious brown mark the comic is about as beat up as one can get without the cover actually falling off. It’s just barely holding on. The interior pages, aside from some bent corners on the lower right, look much nicer.

While discussing other television comic tie-ins (Bonanza and The Man from U.N.C.L.E., among others) I’ve pointed out that the likenesses of the characters, and their real-life counterparts, haven’t always been that spot-on. With The Jetsons comic book, though, that’s not a problem. It’s been years since I watched an episode of The Jetsons but I’m confident the likenesses are near perfect. 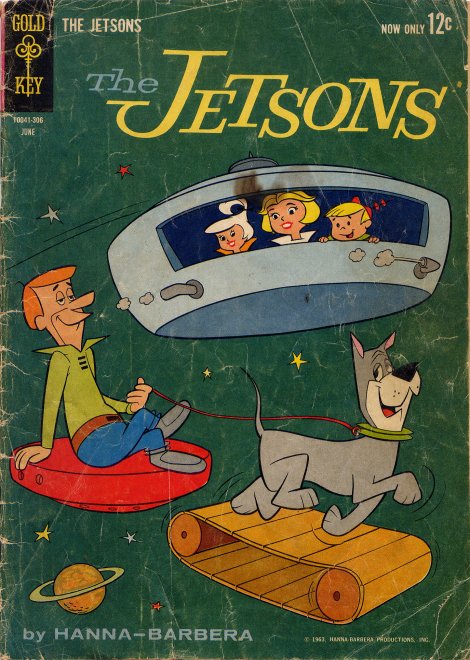 This issue includes four complete The Jetsons stories plus one Lippy the Lion and Hardy Har Har back-up story. My copy is missing the centerfold but I believe the Lippy and Hardy story is only four pages. The first Jetsons story runs ten pages, the second and third are four pages and the last is seven pages.

The following page is from the first story in which George comes down with a case of “automatic-itus” that causes him to make mistakes whenever he’s around anything mechanical. He decides to take the family to Jetstone Park for a little nature. But Jetstone Park is anything but natural. Eventually, the family escapes to the real outdoors and enjoys a picnic dinner. 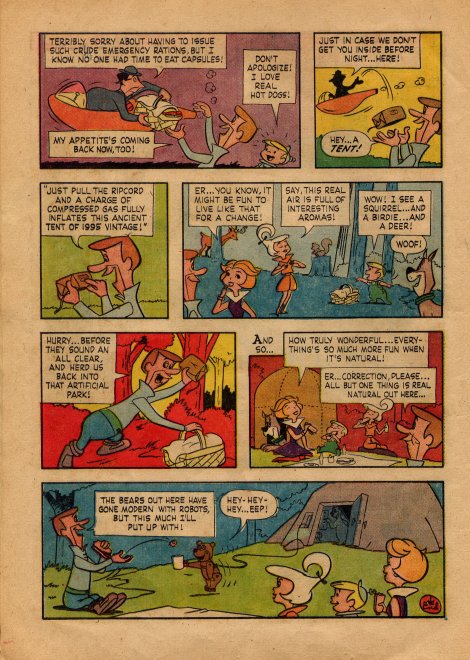 The second story (Elroy and Astro in “A Dog’s Best Friend is His Boy”) also deals with a medical issue, this time with Astro. He has “automation-melancholia” from his automatic doghouse. In the third story (Judy Jetson in “Lonely for Her One and Only”) Judy and her date Zip take a trip to the Moon and are attacked by a Spacian. Elroy, who had stowed away in the back of Zip’s space cycle, pops up just in the nick of time and saves the day.

In the final story (The Jetsons in “Getting Ahead the Hard Way”) George stumbles upon a formula for synthetic cloud and brings it home. At first things are all puffy and fun but soon the synthetic clouds start sucking all the moisture out of the air. This last story is my favorite but they’re all short, enjoyable adventures. Rosey the robot maid only makes one brief appearance in the first story. Then again, Rosey was only in a handful of episodes during the 1962-1963 version of The Jetsons.