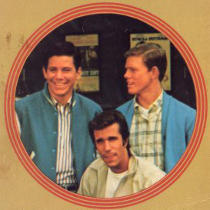 Prolific TV tie-in writer William Johnston wrote eight novels based on Happy Days (one was a novelization to be technical). Ready to Go Steady was the first. I haven’t read any of the others but this one is notable for including Chuck Cunningham, Richie and Joanie’s older brother who famously disappeared from the television series after its second season. The story, however, revolves around Richie.

Richie, unlike his friends, is lucky enough to get a summer job working for Mid-State Distributors, a grocery supplier. On the way to his first day of work he meets Emma Watt, described as “uncommonly attractive,” and her younger brother Bobs. Yes, Bobs. Fonzie, by the way, is hitchhiking west during the summer, so he won’t be around. Richie makes plans with Emma to show her around town later that evening. The poor boy doesn’t know what he’s in for. 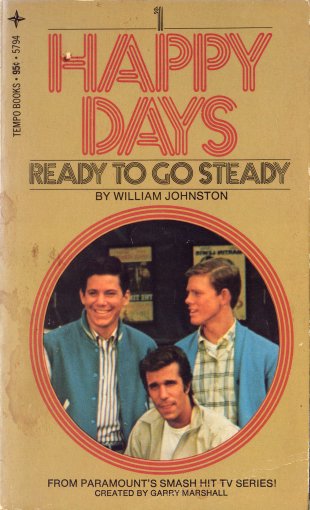 When he takes her home after showing her the filtration plant and the statue in the park, Emma kisses him. He’s left in a daze for hours. Before long, Richie and Emma are dating. They double with Richie’s boss at Mid-State Distributors, Joe, and his wife Millie. Joe thinks being married is the bees knees and continually talks it up to Richie. So, Richie and Emma decide to get married. His parents don’t react that well to his announcement: Marion cries and Howard asks questions.

Unfortunately for Howard, his hopes that Emma’s parents would veto the marriage are dashed. They don’t mind at all. Richie becomes increasingly confused about the way Emma is acting and the reactions he’s getting from his friends. And when he learns that Joe and Millie are getting divorced (she wanted babies) he starts thinking. About college, about furniture, about being a kid. 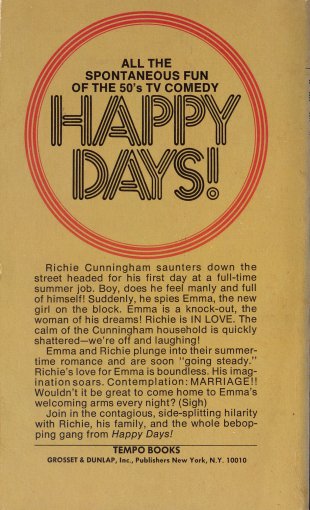 By the end of the novel, everything is back to the status quo. Richie and Emma decide to put off getting married and just go steady for a while. Then they decide to go steady in secret but date other people. Finally, they decide to just be good friends. The two meet, fall in love, get engaged and break it off all in 152 pages. Incredible.

Ready to Go Steady does a pretty good job capturing the tone of the series, although at times the dialogue seems a bit juvenile. Richie refers to women as females more than once, which is pretty odd. Ralph and Potsie aren’t given much to do and I don’t think Joanie even makes an appearance. The lack of Fonzie is certainly noticeable although at this early point in the series, Fonzie had yet to become the breakout star. He’s not even wearing his leather jacket on the cover!