The FFC mandated transition to digital television allowed stations to begin broadcasting digital subchannels in addition to their primary channel. Depending on the market, subchannels are available over-the-air (i.e. 30.1, 30.2, 30.3) as well as on cable. Over the next few days I’ll be examining a number of what I call “classic television digital specialty networks” which are distributed primarily via digital subchannels. In most cases, affiliates have the option of taking some or all of the national feed, meaning their schedules may not match the national schedule.

Formerly known as NBC Nonstop, a digital network for NBC’s owned and operated stations, Cozi TV had a soft launch in December 2012 prior to its official launch on January 1st, 2013. You can read my January 7th review of the network here. As of January 2016, Cozi TV had 85 affiliates covering more than 75% of the country. You can check to see if it is available in your area at the Cozi TV website.

When it first launched, the network aired a mixture of classic television shows, old movies and lifestyle program. Now it just airs TV shows, many from the 1980s and 1990s. Some of the older shows are Adam 12, The Lone Ranger, The Dick Van Dyke Show, My Favorite Martian, Charlie’s AngelsLassie, and Make Room for Daddy.

Newer shows include The A-Team, Hart to Hart, Quantum Leap, Miami Vice, and Murder, She Wrote. The most recent additions to the Cozi TV schedule are Frasier, Quincy, M.E., and Little House on the Prairie–they joined Cozi TV in September 2016.

Depending on how you watch Cozi TV (cable vs. over-the-air) the first thing you’ll probably notice while watching Cozi TV is the aspect ratio. Here’s how I described it in my January 2013 review, based on watching the network over-the-air:

There are black bars on all four sides rather than the more familiar top and bottom bars (“letterbox”) or right and left bars (“pillarbox”). Bars on all four sides is called “postage stamp” or “windowbox” and is the result of 4:3 SD content being up-converted for 16:9 HD widescreen use and then downconverted when viewed on a 4:3 SD set. You can read more about formats and aspect ratios in this paper prepared for the National Association of Broadcasters (NAB).

Interestingly, while most of the shows seen on Cozi TV maintain their original 4:3 aspect ratio, some have been cropped or stretched to 16:9 widescreen. Here are some screen shots of Charlie’s Angels in widescreen: 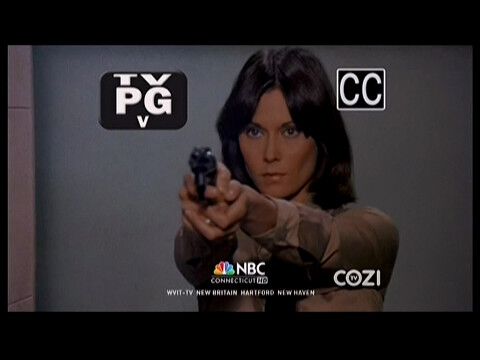 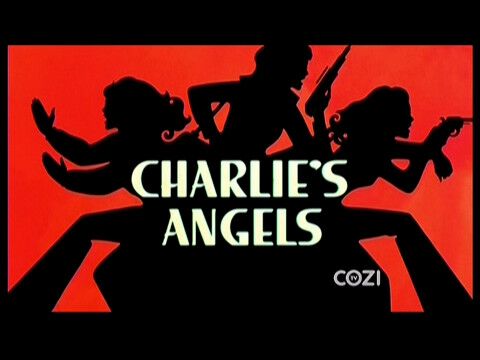 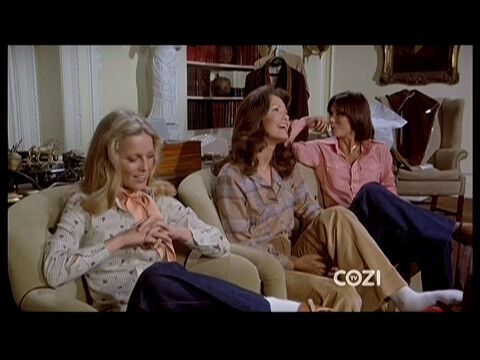 It appears all episodes on Cozi TV are edited to fit more commercials. I timed a number of episodes for my review and found most were cut and later recorded and timed a few more episodes. All were missing 4-6 minutes: Charlie’s Angels (43:52), The Lone Ranger (21:53) and Alias Smith and Jones (43:36). When it launched, closing credits were not squeezed for promotional spots, but at some point that changed and the network now squeezes credits on most or all of its shows and also cuts out closing credits entirely for some shows.

The network features a rather large bug in the lower right hand corner, although it is slightly more transparent than it used to be. At the start of every show there is also a large TV rating icon. And at least once an hour stations must identify themselves. It all adds up to a lot of clutter: 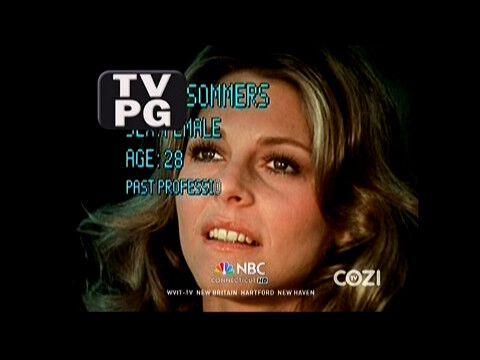 If you’re a Cozi TV viewer, hit the comments with your thoughts.