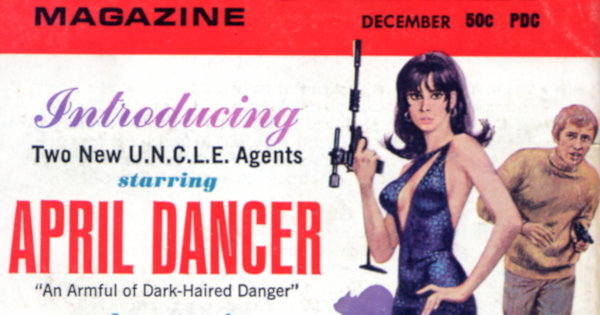 NBC premiered The Girl from U.N.C.L.E., a spin-off of its popular spy series The Man from U.N.C.L.E., in September 1966. Stefanie Powers starred as secret agent April Dancer with Noel Harrison as Mark Slate, her British partner. The two worked for the United Network Command for Law and Enforcement or U.N.C.L.E. Leo G. Carroll co-starred as Alexander Waverly, their boss. In December of that year, Leo Margulies Corp. published the first issue of The Girl from U.N.L.C.E. Magazine, a digest sized magazine containing a full-length novel, five short stories, and a pair of feature articles profiling Powers and Harrison.

(The magazine may have been on newsstands weeks or a month before its cover date of December 1966, depending on how the publisher handled its release schedule.)

Although I have been a huge fan of The Girl from U.N.C.L.E. for many years, it was only last year that I purchased a copy of the very first issue of the magazine and I only got around to reading it last month. The cover declares that found inside is “a complete novel of desert terror” called “The Sheik of Araby Affair,” written by Robert Hart Davis. It runs for 92 pages, which is a bit brief even by comparison to the short length of the two The Girl from U.N.C.L.E. tie-in novels, which run about 128 pages.

“The Sheik of Araby Affair” was an enjoyable read. It involved April being assigned to get close to the handsome Ranjit Sighn, Sheik of the fictional country Mossagbah and collaborator with the villainous THRUSH, an organization bent on world domination and the nemesis of U.N.C.L.E. Somewhere in the vast deserts of Mossagbah was a secret weapon being developed by THRUSH. It was up to April and Mark to figure out what it was and how to stop it. At first, April was believed to be a harmless American heiress but eventually both she and Mark were discovered. They faced certain death but obviously managed to escape. 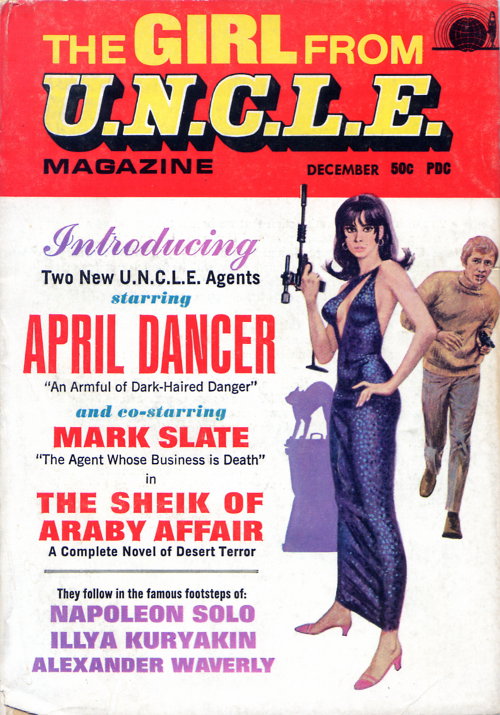 I don’t want to give too much away, so I won’t reveal how the novel ends. There’s a subplot involving a young girl who wanted to run away to the United States to escape her father. Both Napoleon Solo and Illya Kuryakin, characters from The Man from U.N.C.L.E., appeared in the novel. I thought the characterizations of April and Mark were pretty spot on. Who knows how many episodes, if any, the author was able to view before writing this. But they weren’t particularly well-rounded characters on the television show.

After finishing “The Sheik of Araby Affair” I was very disappointed to learn that the five short stories had nothing to do with The Girl from U.N.C.L.E., which was not at all clear based on the cover or table of contents. I actually thought some were quite well written. That being said, I was expecting more adventures involving April and Mark, not random mystery tales involving murder, smuggling and more murder.

The profiles of Stefanie Powers and Noel Harrison were probably provided by the MGM publicity department. They’re harmless, although some might consider the Powers article to be a little sexist. She’s described as a “5’5″ well distributed version of girl” who handles the Mod look “with a magic perfection.”

For the record, a 12-issue subscription to The Girl from U.N.L.C.E. Magazine cost $5. Obviously, subscribers didn’t get all they paid for given the magazine ended after just seven issues. I wonder if The Man from U.N.C.L.E. magazine was substituted to fill out the subscriptions.

Back in October 2009, I reviewed The Birds of a Feather Affair, the first of two novels based on The Girl from U.N.C.L.E. published by Signet Books.