The New People: They Came From The Sea
By Alex Steele
First Published September 1969
Published by Tempo Books
150 Pages

For a show that only lasted five months, ABC’s The New People produced quite a few tie-ins. In addition to this novel, published by Tempo Books, there were also two comic books published by Dell (read more about them here). I purchased a copy of the tie-in novel at least a decade ago, read it once and set it aside. I read it again for this column and really enjoyed it.

(According to Kurt Speer’s TV Tie-Ins: A Bibliography of American TV Tie-In Paperbacks, author Alex Steele was actually a pseudonym of prolific tie-in writer William Johnston. The New People: They Came From The Sea was the only novel published using that name.)

For those not familiar with The New People, the series dealt with a group of college students whose plane crashes on a deserted island, killing all the adults aboard. Left to fend for themselves, these new people had the opportunity to create a new society, a better society. Luckily, the island happened to be an unused nuclear testing facility. A town had been built on the island and stocked with both mannequins and food. 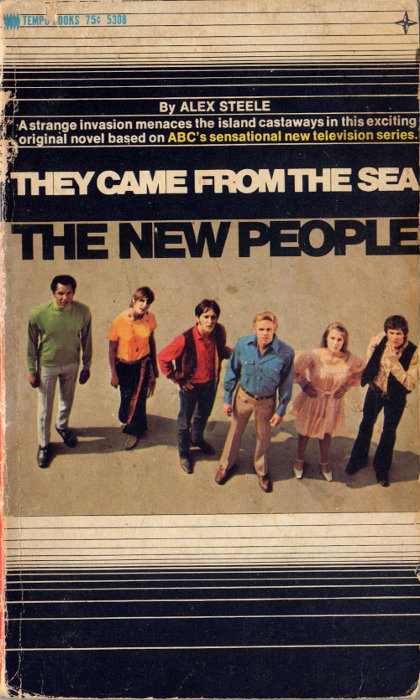 Front Cover to The New People: They Came From The Sea – Copyright 1969 Thomas/Spelling Productions

The basic plot of the novel involved a hoard of poisonous crab-like creatures descending on the island, killing one of the new people and putting another in a coma. When dim, hostile and racist Bull learned he was immune to the creatures, he set himself up as king and the bulk of the survivors flocked to him, believing he was the only way to survive the creatures.

But a few of the students refused to go along with Bull. They wanted to look after the sick student and figure out what to do about the creatures. Bull became increasingly irrational, insisting first that one of the black survivors be exiled and later that he be killed. Eventually, the students who refused to bow down to Bull came up with a plan to rid the island of the creatures. All they had to do was confront Bull.

I’ve only seen the pilot episode of The New People so I can’t really say whether the novel accurately reflects the feel of the series or whether the characters as described in the novel match those seen on screen. I find it interesting that two of the main characters — Ginny Loomis (played by Jill Jaress) and Stanley Gabriel (played by Dennis Olivieri) — although pictured on the cover, are not in the novel. Perhaps the author was working with an early draft of the pilot script that did not include them or left them out to keep the number of characters to a minimum. 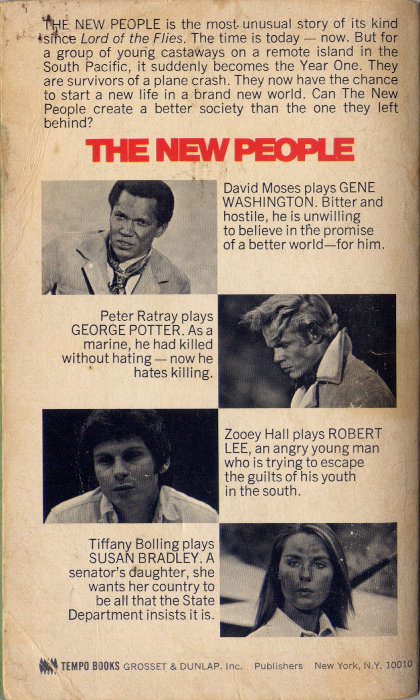 Back Cover to The New People: They Came From The Sea – Copyright 1969 Thomas/Spelling Productions

The character of Bull, who is so central to the plot of the novel, had a minor part in the pilot episode but never appeared in the series again. Two other characters who appeared briefly in the pilot but not other episodes also have significant roles in the novel, while a third appears to have been created just for the tie-in.

The crab-like creatures, whose tongues whip out and poisoned anyone who got too close, are a bizarre nemesis for the castaways, given that the series was a straight drama with not fantastical elements. But they serve their purpose well, forcing a division among the castaways and allowing Bull’s racism to come to the surface.

Overall, The New People: They Came From The Sea was a fun read. Given that the series will likely never see the light of day on DVD or streaming, this tie-in novel and the two tie-in comics are pretty much it for those interested in the series. Perhaps I’ll review one of the comics in a later column.

In September 2009 I reviewed the 10th Star Trek comic book from Gold Key Comics (published in May 1971), calling the artwork “almost unrecognizable” and criticizing the story for concluding with a huge plot hole.

In April 2010 I reviewed V, The Pursuit of Diana by Allen Wold (published in December 1984), the third in a series of novels published as part of the media franchise that spun-off from NBC’s V: The Miniseries. Even though I’m a fan of V: The Series, I did not like the novel, particularly the introduction of mind control powers for the fiendish Diana.

One Reply to “Bookshelf: The New People: They Came From the Sea”