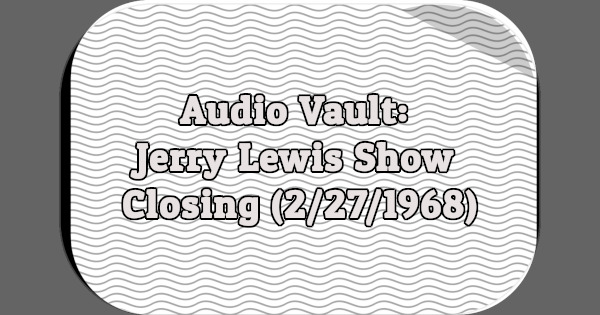 Here’s audio from the closing credits to the February 27th, 1968 episode of The Jerry Lewis Show on NBC:

Jerry Lewis sings the final verse of his closing theme song (“Smile”). Then comes a network voiceover promotional spot for an NBC special about Clark Gable to be seen the following week. (“Dear Mr. Gable” ran in place of The Jerry Lewis Show from 8-9PM ET on Tuesday, March 5th, 1968.)

Two additional network promotional spots are also heard. First, a promo for the 1965 movie McGuire, Go Home!, which aired from 9-11PM ET on February 27th as part of NBC Tuesday Night at the Movies. Next, a spot for The Tonight Show Starring Johnny Carson. Ed McMahon voices both of these promos.

Next week in this time period, see a one-hour special on Clark Gable. His life, his love, and his leading ladies.

This is Ed McMahon inviting you to stay tuned now as Dirk Bogarde and Susan Strasberg star in McGuire Go Home. Next on Tuesday Night at the Movies. And later this evening, fresh from his truimphant stint in Hollywood, Johnny Carson will be here with his guests Melvyn Douglas, Morey Amsterdam, Orson Bean, and Anne Heywood. All on The Tonight Show, the late night place to be, right here on NBC.