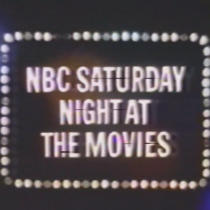 Over the years, I’ve received many e-mails from people desperate for the opportunity to view the opening credits to the NBC Saturday Night at the Movies. Specifically, the second version of the credits introduced in the mid-1960s and used until 1972. Audio of the opening credits has been available online for years but video has been elusive.

Until now, that is. In September, YouTube user Rick Thomas uploaded a video of the NBC Saturday Night at the Movies opening credits from October 1972. Here they are:

This particular opening credits sequence is for the 1967 movie The War Wagon starring John Wayne and Kirk Douglas.