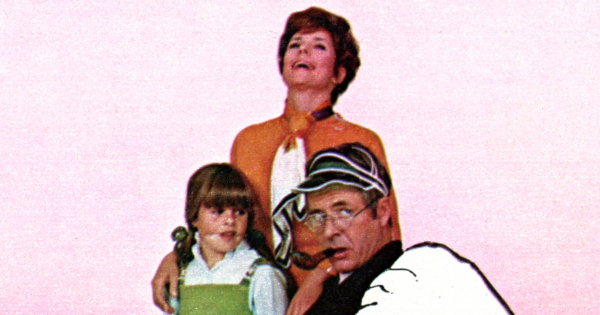 Acclaimed one season wonder My World and Welcome To It celebrates its 50th anniversary today. The sitcom premiered September 15th, 1969 on NBC. Based on the life and work of writer and cartoonist James Thurber, it starred William Windom, Joan Hotchkis, and Lisa Gerritsen.

Not all critics were impressed with the show, despite its reputation as a critical darling. Jack Gould called the debut episode “hackneyed gibberish relieved only by an occasional Thurber drawing” in a review for The New York Times. See what other critics had to say by reading my in-depth article about My World and Welcome To It.

Low ratings led NBC to cancel the show at the end of the 1969-1970 season, inspiring some viewers to write the network in protest. My World and Welcome To It earned an Outstanding Comedy Series award at the 22nd Annual Emmy Awards in May 1970. Windom won in the Outstanding Continued Performance by an Actor in a Leading Role in a Comedy Series category.

During the summer of 1972, CBS aired select repeats of My World and Welcome To It. It also aired on cable channel WGN in the early 1990s.

Do you remember watching My World and Welcome To It? Were you disappointed when NBC cancelled the show? Would you buy it on DVD?