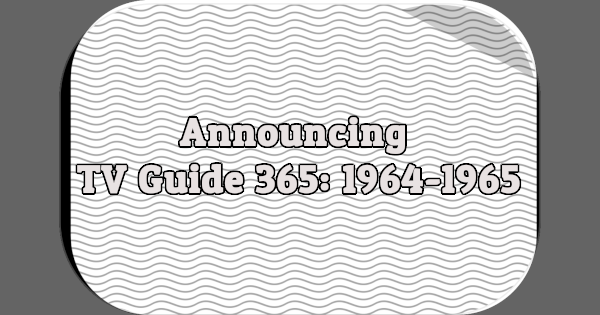 As I revealed earlier this month, I’m diving back into my collection of TV Guide from the 1964-1965 season. Five years ago, I explored all 52 issues on a weekly basis (which I’m currently doing with the 1989 calendar year). My new project, TV Guide 365: 1964-1965, will feature daily prime time listings drawn from the pages of TV Guide.

Starting next Thursday (September 19th), every day I’ll post the prime time listings published 55 years earlier in TV Guide. The plan is to try to recreate the TV Guide experience as much as I can. That means using the shortened titles often included in listings and noting whether certain programs were in color or not. What you won’t find are channel numbers, only networks. All times will be Eastern/Pacific.

Because this is Television Obscurities, I won’t be including cast and guest cast details for popular, long-running shows like Bonanza, The Lucy Show, Bewitched, or The Dick Van Dyke Show. The same goes for movies broadcast as part of NBC Saturday Night at the Movies, The ABC Sunday Night Movie, or NBC Wednesday Night at the Movies. That information is typically easily available online.

I will take the time to type out cast and guest cast details for obscure shows like Wendy and Me, 90 Bristol Court, The Baileys of Balboa, and Kentucky Jones. Some of this information may also be available online but it may not be.

Here’s an excerpt from the listings I’ll share on Saturday, September 19th, 1964:

Finally, the focus of this project is TV Guide listings, not what actually aired, so whatever TV Guide published in its listings is what I’ll be sharing every day. Even if a program or episode was pre-empted, I’m still going to include it.