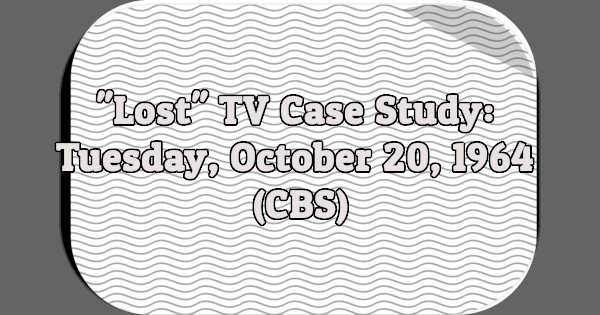 It isn’t easy to research lost television. For one thing, proving a certain episode or program doesn’t exist is difficult, if not impossible. Identifying the current copyright holder and finding contact information is hard. Tracking down original film elements or master videotape recordings is challenging.

The sheer amount of television programming aired in the United States is overwhelming. Let’s take a look at just one day on one network to see how problematic the search for lost television can be.

During the 1960s, Broadcasting magazine published quarterly “TV Showsheets” that broke down network programming by day and time and sponsors. Included were daytime and evening programs. I’ve also consulted television listings published in TV Guide, The New York Times, and The Hartford Courant.

NOTE #2: For many years CBS offered two feeds of its evening news program, the first at 6:30PM ET and the second at 7:00PM ET. Affiliated stations carried one of the feeds and broadcast local or syndicated programming during the other half-hour.

Altogether, CBS offered more than 11 hours of network programming on Tuesday, October 20th, 1964. Of course, not every CBS affiliate aired everything the network provided.

Figuring out which of these programs still exist today would take a ton of work. And even then it might not be possible to determine with any degree of certainty whether certain programs are truly lost. There’s good reason to believe the various news broadcasts are long gone, however. Any videotape recordings were likely erased and reused; if kinescope recordings were made, they may have been destroyed. The same goes for the soap operas and game shows, although I have no way of confirming whether or not they exist.

More than 6,000 episodes of Captain Kangaroo aired on CBS between 1955 and 1984. An edited version later aired on PBS stations across the country from 1986 to 1993. I don’t know the status of the series or who currently owns the copyright. Like the news broadcasts, soap operas, and game shows the odds of this episode surviving are low.

That brings us to prime time. CBS aired World War I (“They Sank the Lusitania”) from 8-8:30PM ET. This and every episode of World War I exists. The complete series has been released on DVD at least twice. The Red Skelton Hour followed from 8:30-9:25PM with guest Bobby Rydell. This episode exists, likely in the collection of The Red Skelton Museum of American Comedy. If not, Historic Films has a copy.

From 9:25-9:30PM ET, CBS broadcast five minutes of paid Democratic politic talk. I haven’t found any details about who spoke or what the topic was. Does it exist? I don’t know. Fans of Petticoat Junction were likely disappointed when CBS pre-empted the sitcom from 9:30-10PM ET for a paid 30-minute speech by Senator Barry Goldwater, the Republican candidate for President of the United States. I’m not sure what happens to this sort of paid political programming after a campaign ends. If a videotape or kinescope doesn’t exist, the Theological Commons at the Princeton Theological Seminary has an incomplete audio recording available online.

Finally, from 10-11PM ET, CBS aired The Doctors and the Nurses (“No Shadow Where There Is No Sun”) with guest stars Merrie Spaeth, Jeff Corey, and Michael Strong. This episode exists. CBS, Inc. renewed the copyright in 1992, which suggests the original film elements are somewhere in a CBS/Viacom/Paramount archive. The UCLA Film & Television Archive also has a copy of this episode on 16mm film in its collection.

I put together this case study in just a few hours over the course of a week or so. There was no intensive sleuthing involved, only quick Internet searches. The intent was not to prove that any particular program broadcast by CBS on Tuesday, October 20th, 1964 exists or is lost. Instead, my goal with this case study was to offer a limited example of how complicated it can be to research the status of television programming.

Many of these programs may actually be lost, the master videotapes erased and any film elements destroyed. There’s simply no way to know until someone does the work to find out.

This was one day of programming on one network, a little over 11 hours in total. Confirming the status of just one of these programs may take weeks or months. Assuming ABC and NBC offered a similiar amount of network programming, that’s more than 30 hours of television across three networks from a single day in October 1964. The idea of trying to track down each and every program is staggering.