There was a lot of interest here at Television Obscurities a few weeks ago surrounding the 50th anniversary of President John F. Kennedy’s assassination. Much of it had to do with CBS News stream video of its 1963 coverage of the assassination, its aftermath and Kennedy’s funeral–in real time. I watched about the first 90 minutes of the coverage and was tweeting my thoughts while reading tweets from hundreds of other people.

I also put together a four-part special feature called What America Didn’t Watch. In these posts, I examined the prime time network programming pre-empted by coverage of the assassination. Take a look:

There are a few interesting things relating to television’s response to the Kennedy assassination that I want to discuss briefly. I had hoped to post this early last week but Thanksgiving got in the way.

According to Broadcasting, “virtually all unaffiliated television stations” in the country tapped into network feeds over the course of the four days of coverage, at no cost. ABC fed WNEW-TV, WTTG, KTTV and WGN-TV; CBS fed WOR-TV, WPIX, WNDT, KPHO-TV and KPLR-TV; NBC fed some 60 stations, including some in Canada [1].

The famous Zapruder film that showed President Kennedy being shot was not seen on network TV until 1975. It aired March 6th, 1975 during ABC’s late-night news magazine Good Night America, hosted by Geraldo Rivera.

WNEW-TV in New York City broadcast a different film (taken by Marie Muchmore) on Tuesday, November 26th, only four days after the assassination.

According to Broadcasting, United Press International Newsfilm sold the 8mm footage, blown up to 16mm for broadcast, to WNEW-TV. UPI also provided copies to subscribers around the world [2]. 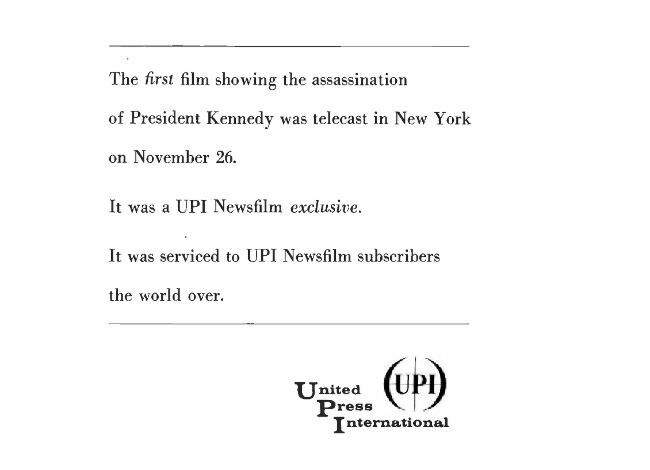 UPI took out a rather distasteful full-page advertisement in Broadcasting, declaring how it exclusively provided the first film showing the president’s assassination.

According to the December 9th issue of Broadcasting magazine, an estimated 198,000 national spot and local TV commercials didn’t aired during the three-and-a-half days TV was focusing on President Kennedy’s assassination [3].

Industry monitoring group Broadcast Advertisers Reports came up with that figure by counting the number of commercials aired by 238 stations in the top 75 markets during the same period the week before. It then projected the totals for all stations.

The networks reportedly pre-empted some 970 commercials, the equivalent of 72,600 “station exposures.” Added to the national and local spots that didn’t air, the final figure came out 270,600 commercials not seen.

A Few Commercials Were Aired

The networks and the vast majority of TV stations refrained from airing any commercials during the three-and-a-half days of news coverage. The National Association of Broadcasters released the following statement on Friday, November 22nd:

In response to inquiries as to how stations should program, we recommend that for the next 24 hours commercial content should be limited to briefest sponsor identification, with no commercial messages as such. Beyond this period we suggest that station management use its own good judgement. [4].

In response to further requests re commercial practice, believe continuation of noncommercial policies throughout Monday, a national day of mourning, is reasonable. [5]

A few stations didn’t heed the recommendation. Perhaps 1% of all radio and TV stations in the country did air some commercials. Unidentified stations in California, Louisiana, Ohio, Oregon, Virginia and Texas all supposedly showed commercials during the period [6].

The New York Times identified ABC affiliate KTBS-TV in Shreveport, LA as one station that aired commercials. A station spokesman explained that when network coverage became “repetitious,” the station began airing children’s and family appropriate programs as well as motion pictures, with limited commercials as well. There were initially complaints from viewers but later approval [7].

Some Viewers Not Happy About Missing Favorite Shows

Although most reaction to TV coverage of the assassination and President Kennedy’s funeral was very positive, there were some viewers who weren’t pleased their favorite shows were pre-empted in favor of continuing news reports.

According to The New York Times, the networks all received calls on Saturday, November 23rd from viewers asking when regular programming would return. ABC said it got “many compliments and only a few complaints” while CBS received “many” calls, some from viewers upset “their favorite shows had been canceled.” NBC received some 200 calls, half of which were complaints [8].

Broadcasting noted that network officials could offer only the death of President Roosevelt in 1945 as a comparison for the amount of public response they received. Each of the networks reported more than 5,000 letters, telegrams and phone calls, the vast majority of which praised the TV coverage. Any protests were “buried in the avalanche of favorable mail” [9].