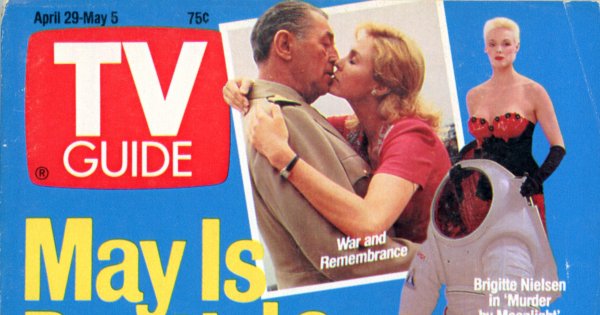 On the Cover (clockwise from top): Robert Mitchum and Victoria Tennant, by Jim Globus; Brigitte Nielsen, by Sven Arnstein; Holly Hunter and Ali Grant, by Bruce Birmelin; and David Keith, by Tony Esparza.

The cover article is, unfortunately, less an article and more a list of miniseries, made-for-TV movies, specials, reunions, cliffhangers, series finales, and sports–all airing on the networks, PBS, and select cable channels during May. ABC will air another 11.5 hours of War and Remembrance. Brigitte Nielsen will solve a murder mystery on the Moon in Murder by Moonlight on CBS. And NBC has The Trial of the Incredible Hulk and Bionic Reunion on NBC.

The profile of actress Victoria Tennant includes an interesting behind-the-scenes story about War and Remembrance. While filming in Washington, D.C., producer-director Dan Curtis ran into trouble when he was informed he could not take cameras into Lafayette Park. Eventually, Secretary of the Navy James Webb personally gave Curtis permission to film inside the park.

The most interesting part of the article about James Woods is probably the revelation he is obsessed with his Macintosh personal computer: “I feel naked without it.” The article about Brigitte Nielsen spends far too much time discussing her personal life. I want to know more about Murder by Moonlight.

Robert MacKenzie reviews Columbo and he is not a fan. Peter Falk is “seems to be on autopilot” and the two-hour ABC Mystery Movie format is too long:

The best of the old Columbos were the 90-minute versions. They had more drive and pace, they were succinct, and they were fun That’s what’s really missing here, the sense that Falk and the other actors are having us on, enjoying the game. And an occasional witty line wouldn’t hurt. Or an interesting woman.

MacKenzie briefly recaps two Columbo installments, neither of which he particularly enjoyed.

There are four In the News reports this week, including one about the search for an actress to play Jackie Kennedy in an upcoming six-hour miniseries and another about ABC’s low chances of turning a profit on Moonlighting.

Two of the six letters respond to an article about the women of L.A. Law published in the April 1st issue. Here’s one:

Susan Dey complains that she’d like her character of Grace Van Owen to “be feminine, to flirt with the jury. But the producers won’t let me.” In terms of professional realities, the producers are correct. Female district attorneys have struggled long and hard to win equality and respect in the courtroom. The battle for full acceptance is far from over. Neither I nor any of my female colleagues would ever flirt with a jury in a trial. It would be degrading and unthinkable conduct. Don’t set us back 25 years, Susan. Explore Gracie’s private life, if you wish, but don’t change her courtroom behavior one bit. We like her just as she is–an accurate portrayal of her real-life counterparts.
Penny S.
Deputy District Attorney
Los Angeles

10PM CBS (11) (2D) (7) (10) (15) WEST 57TH (CC); 60 min.
Scheduled: A report on Leonard Peltier, a Sioux Indian serving two consecutive life sentences at Leavenworth Penitentiary for the 1976 murders of two FBI agents. The segment includes talks with Peltier; his lawyer William Kunstler who, according to producer James Stolz, feels Peltier did not get a fair trial.

8:30PM CBS (11) (2D) (7) (10) (15) HEARTLAND (CC)–Comedy
A piece of an airliner falls out of the sky and kills one of the Staffords’ sheep, and while Tom and Johnny (Richard Gilliland, Jason Kristofer) pause to consider their mortality, B.L. (Brian Keith) takes the airline for a ride.

10PM NBC (13) (35) (4) (4D) (22) (33) DREAM STREET–Drama; 60 min.
Kara (Christine Moore) thinks she might have a shot at a real relationship when she encounters the author of her dreams at a coin laundry; Joni (Cecil Hoffmann) meets more of Joey’s family and finds their embrace slightly smothering; and Harry (Peter Frechette) arranges a drag race between Donny and Joey Camaro (Sam Rockwell, Thomas Calabro).

This was an underwhelming issue. The cover article could’ve been so much more than a list of miniseries and movies to watch in May. It would’ve been interesting to see TV Guide examine May sweeps and how the networks hope to draw viewers away from cable.

That’s it for this issue. Check back next week for my review of the May 6th, 1989 issue of TV Guide. As always, hit the comments with any thoughts or reactions.