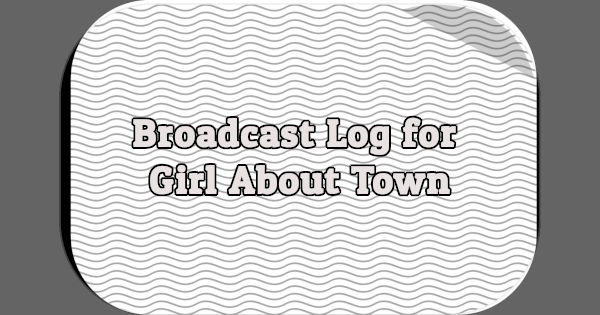 Girl About Town was Kyle MacDonnell’s second television series on NBC–after the original incarnation of For Your Pleasure–and her first to have a sponsor: Bates Fabrics, Inc. Although the company signed a 52-week contract with NBC, only 43 episodes were broadcast before the series was cancelled.

The series premiered in September 1948 and initially aired on Wednesdays at 8PM with each episode running 20 minutes. It moved to Sundays at 10:10PM in February 1949.

Unlike For Your Pleasure, which featured a nightclub atmosphere, Girl About Time gave the impression that Kyle was rushing around New York City meeting people and performing in venues throughout the city. As was the case with For Your Pleasure, Kyle was backed by the Norman Paris Trio. Actor Johnny Downs played Kyle’s “press agent” responsible for getting her gigs. Downs was replaced by Earl Wrightson in October or November 1948.

No episodes of the series are known to exist. It aired live on NBC’s Eastern network. At least as early as January 1949, kinescopes were being shipped to Chicago to be aired over NBC’s Midwest network on a delayed basis.

You can read more about Girl About Town in my article Kyle MacDonnell: TV’s Forgotten Star.