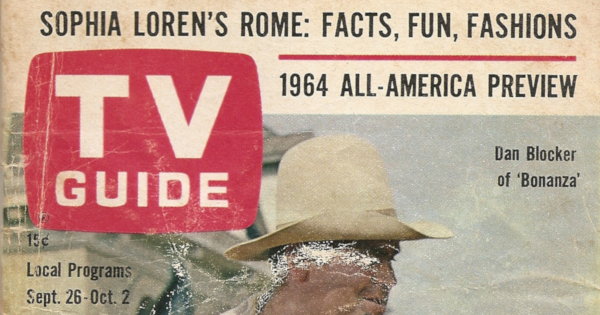 On the Cover: Dan Blocker of NBC’s Bonanza (photograph by Carl Frith).

You might think that this issue would have included at least one article about the new TV season that got underway in September 1964. Perhaps an article highlighting a particular new show or speculating about ratings and the odds of survival for the new fall fare. There was nothing that in this issue. There was a preview of the 1964 football season and a look at Sophia Loren’s November ABC special, which perhaps goes to show where TV Guide‘s priorities lay.

Still, I’m a little surprised there wasn’t some discussion of the new season. The listings in this issue (Saturday, September 26th through Friday, October 2nd) covered most of the third week of the season. 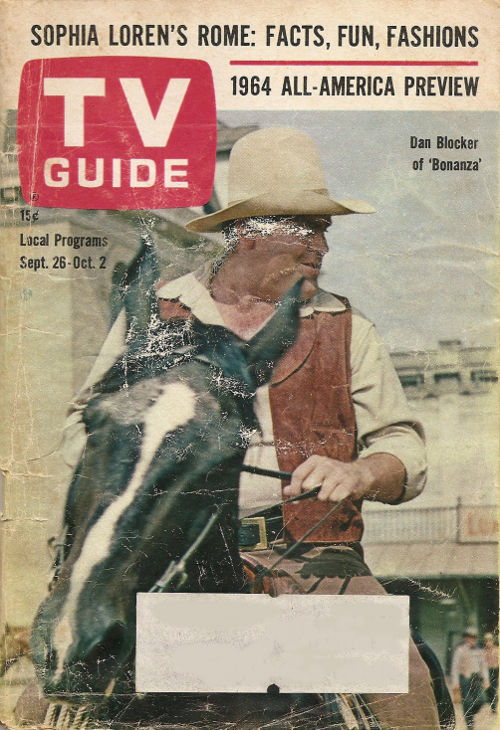 My copy of this issue is in pretty poor shape. The cover is severely creased and almost worn through in several places and barely attached to the spine. It definitely got used. The coupon worth 10 cents towards the purchase of a half gallon of Hood Coffee Toffee crunch ice cream was not used, however.

The editorial in this issue discussed Section 315 of the Communications Act of 1934 (aka the “equal time” rule). It suggested that Congress should enact legislation allowing radio and TV stations to only give equal time to candidates from major political parties. “A series of debates or joint appearances, featuring the two major candidates,” declared TV Guide, “is impractical for broadcasters so long as they must also give equal time to a great number of minor candidates.”

The only reason the 1960 Nixon-Kennedy debates were possible is because Congress suspended Section 315, which was not repeated in 1964. TV Guide hoped that if Congress acted after the 1964 election, perhaps future debates might be possible. (They would, but not until 1976).

Some interesting notes from the Hollywood and New York TV Teletype columns:

Included in this issue are five articles and a picture feature in which Jim Nabors has his hair cut Marine-style in front of the cameras for Gomer Pyle, U.S.M.C. There’s a picture of Nabors looking very sad about losing all his hair.

I admit to not reading much of “College Football Calls on the Specialists,” a three-page look at how the 1964 TV Guide All-American team will be chosen. The team will be published in the November 28th issue, so I have that to look forward to. Honestly, I don’t know anything about football other than the very basics of the sport and definitely don’t know anything about 1964 football. I made it about two paragraphs into this article before giving up. But it does prove that football has been popular on television for more than half a century, even if there are some viewers who just don’t get it.

“She Hopes the Prescription Works” is a four-page article about actress Stella Stevens, who hoped her five-episode arc on ABC’s Ben Casey will make her a Big Star. It apparently didn’t work. “Sophia Loren in Rome” is little more than a puff piece for the upcoming ABC special of the same name masquerading as a behind the scenes look at the production of the special in Italy. We learn that Loren loves to gamble and prefers to speak American English rather than British English. There are five pictures of her, all featuring different outfits.

“The Day the Irish Turned Orange” is an interesting two-page look back at the history of color television, with some fun tales about the problems facing color technicians in the 1950s. Red Skelton played a practical joke one night by putting on green makeup, worrying technicians and viewers alike. Colored polka dots were painted on 20 elephants during filming of the pilot episodes for The Greatest Show on Earth, because they were too grey and boring otherwise.

The fifth and final article, “There’s No Place to Hide,” is three-and-a-half pages about Dan Blocker, who also graced the cover of the issue. It mostly discusses his problems with fame and publicity. He couldn’t go to a baseball game without being mobbed by kids looking for autographs, for example. He didn’t like losing his privacy. He was so upset about it that in 1961 he apparently tried to go back to teaching.

From the perspective of a researcher, none of these articles are particularly useful. Most of them are more promotional than factual. I imagine readers in 1964 found them more interesting than I do 50 years later.

The Letters page, also in the listings section, features five letters about the 1964 Miss America contest. One criticizes Miss Arizona for somehow managing to “plug a political candidate in her ventriloquism act.” Other letters discuss Jerry Lewis announcing his new children’s show on Pay-TV; NBC’s NCA football games in color; and the lack of reviews by Cleveland Amory lately (according to a note, Amory’s first review of the new season will appear in the October 10th issue).

In addition to ads for more new and returning network shows, this issue also has some ads for local stations and programs. New shows premiering during the week included Mr. Broadway, My Living Doll, Gilligan’s Island, and Shenanigans. Returning for the new season are shows like Jackie Gleason’s American Scene Magazine, Mr. Ed, What’s My Line?, and That Was the Week That Was. 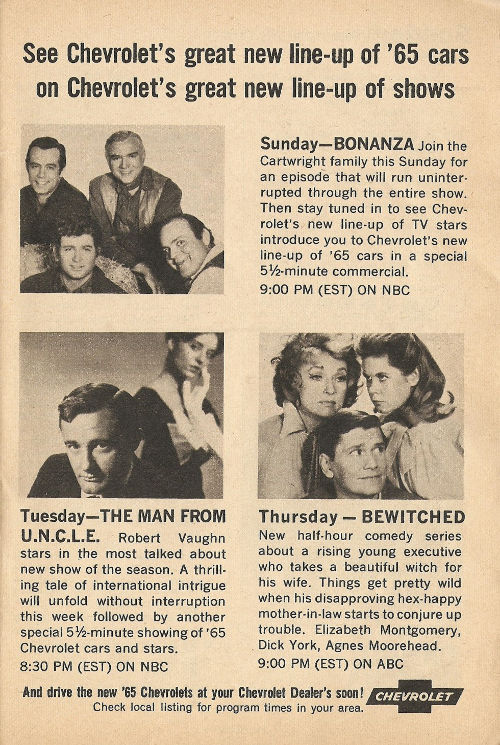 There were at least fourteen sporting events on Saturday alone, ranging from water skiing and roller derby to tennis, horse racing and a snake hunt. Sunday has more sports, mostly baseball and football. And on Monday there’s an Olympic preview in prime time on NBC.

Many of the movies this week were also available the previous week, suggesting that Phonevision didn’t have a huge catalog. I doubt many subscribers were paying to see the same movie week after week.

It was much easier to pick out local programming in this issue than the Fall Preview issue last week. There are some local ads mixed in with all the network ads. Many of them are for local movies, including one promoting WWLP (Channel 22), the NBC affiliate in Springfield, MA that showed a feature movie at 4:30 Monday through Friday with a different them each day of the week. There’s also an ad for Connecticut’s CBS affiliate WTIC-TV (Channel 3) and its after dinner movie on Monday at 7:10PM. This week it was A Prize of Gold (1955) with Richard Widmark. 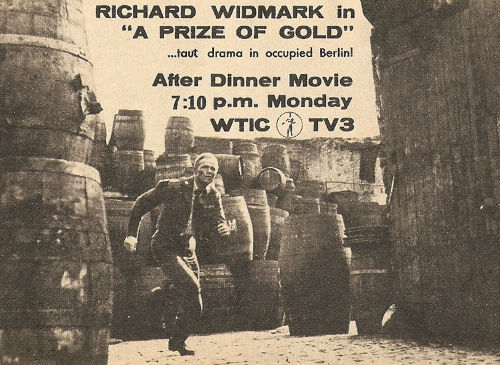 WHDH-TV (Channel 5), the CBS affiliate in Boston, was able to originate color programs at its studio. Weeknights from 6:-6:25PM the station aired a color program called Dateline Boston, followed by a five minute weather report, also in color. The station also had color news breaks throughout the day.

Other local programs of note: WWLP’s Top 22 Plus One Studio Dance Party, weekdays from 6-6:15PM; Starring the Editors, with newspaper editors from Massachusetts and Connecticut, Saturday at 7PM on WHNB-TV (Channel 30); “Connecticut Nurses,” a special on WHNB-TV commemorating the 60th anniversary of the Connecticut Nurses Association, Sunday at 6:30PM; and something called “Connecticut – What’s Ahead?” on WTIC-TV Wednesday at 8PM.