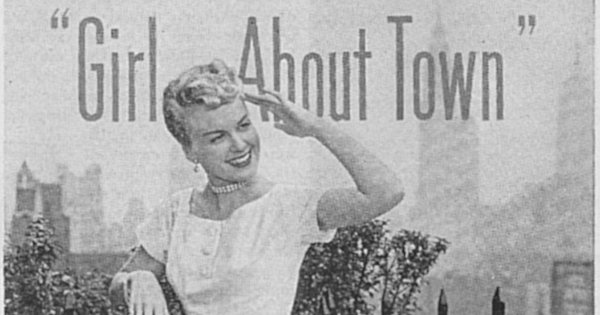 Forgotten NBC musical variety show Girl About Town, hosted by Kyle MacDonnell, premiered 70 years ago today in 1948. It was Kyle’s second television series on NBC–the first was the original incarnation of For Your Pleasure. Sponsored by Bates Fabrics, Girl About Town ran for 43 episodes between September 1948 and June 1949.

Singer Tommy Dorsey, dancers Ellsworth and Fairchild, and dancers Pancho and Diane were just a few of the guests seen on Girl About Town.

The show aired live on NBC’s Eastern network. As early as January 1949, NBC shipped kinescope recordings to Chicago for broadcast over the network’s Midwest network on a delayed basis. Unfortunately, the odds of any of those kinecopes surviving nearly seven decades later is slim to none.

2 Replies to “70th Anniversary of Girl About Town”